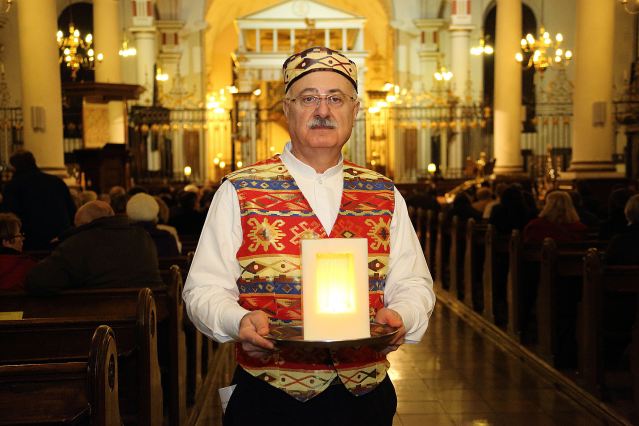 Ara Nahabedian an Armenian man from Crewe, carries the candle down the aisle at Derby Cathedral

Holocaust Memorial Day (HMD) in the UK occurs on the 27th January each year to commemorate the liberation of Auschwitz by Soviet troops in 1945. Formal events are arranged in most major cities to remember this occasion as well as the subsequent Genocides which have taken place across the world.

Derby has an independent ( not Council lead, or funded) HMD Committee which organises a range of events on HMD, itself, as well as during the week. As this year marks the 70th Anniversary of the Liberation of Auschwitz, Sir Anish Kapoor was commissioned to design a candle; 70 were made. A number of them are to be sited in Auchwitz and other locations, the majority were given to those cities whose events reached the quality standard required by the HMD UK committee. Derby was successful in securing one of these candles.

2015 is also the 20th Anniversary of the massacres at Srebrenica, and this together with the Holocaust were to remembered as part of HMD under the banner of “Keep the Memory Alive”.  Although Derby does not have an Armenian Community I had queried with the Committee why the Armenian Genocide was not fully reflected in the 2014 events. My question was too late to take effect in 2014 but I was invited to support the 2015 events.

Also, I was given the opportunity to speak about the Armenian Genocide, and the impact on the Armenian people, today, in Nagorno-Karabakh, during the main events at QUAD Arts Centre. This was also to include other talks, plus music, dance, and drama. At face value – an elegant, and well-planned day. What was the problem?

Transcript of my speech

The Armenian Genocide is not formally recognised in the UK, and many countries in the world, as a “Genocide”. The word “Genocide” was not created until 1948, albeit that the Armenian Genocide, as well as the Holocaust were the inspirations for its initiation. One of the main deniers of the use of the term “Genocide” is Turkey, the latter day incarnation of the Young Turks of the Ottoman Empire who perpetrated these crimes.

Even after 100 years, Turkey is extremely sensitive about the use of this word and will go to great lengths to distribute propaganda, and use tactics to silence dissenters.

Despite the strict guidance of the HMD UK Committee, the team in Derby decided to proceed with including the Armenian Genocide, and all of the publicity referred to that term. In the few days prior to the HMD event on 27th January 2015, the Mayor of Derby received a communication from the Turkish Embassy in London to “request” that references to the word “Genocide” should be dropped, and more circumspect language should be used. Their “complaint” was compounded as we had invited a representative from the Armenian Embassy to join the events in Derby.

A respectful response was sent back to the Turkish Embassy which stated that we would be happy to work with them in future.

The passing references made by the Mayor in his opening speech, and a short statement, read out in the Chapel, were changed from “Genocide” to “atrocity” following this direct request. However, the introductory speech by Graham Falgate ( Chair of the HMD Committee in Derby) and mine, at the QUAD, remained unaltered. In fact it provided extra material as we could explain to the audience that we had been in receipt of undue influence from the Turkish Embassy regarding our stance on the Armenian Genocide. A fact that reinforced the message of the speech.

The implications of this action were profound on freedom of speech in the UK. Just to repeat…the Turkish Government were insisting that we change what we said, and how we said something in Derby, in the United Kingdom, on something that happened 100 years ago!

So my message, that the Genocide of the Armenians is “unfinished business”  for the Turks through on-going intimidation and denial, was exhibited so clearly to the audience in the QUAD on Tuesday. It was a testament to the resolve of the HMD Committee that we refused to change one word of our programme at the QUAD. It has reinforced our resolve to include the Armenian Genocide in the events every year.

Thanks to the Turkish Government, for highlighting to many people who knew nothing of the Armenian Genocide,  that you have something very serious to hide about your role in the killing of 1.5 million Armenians in 1915….and your continuing intentions, today! 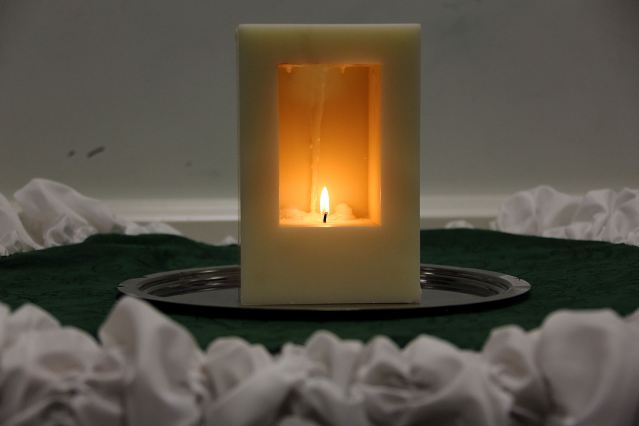