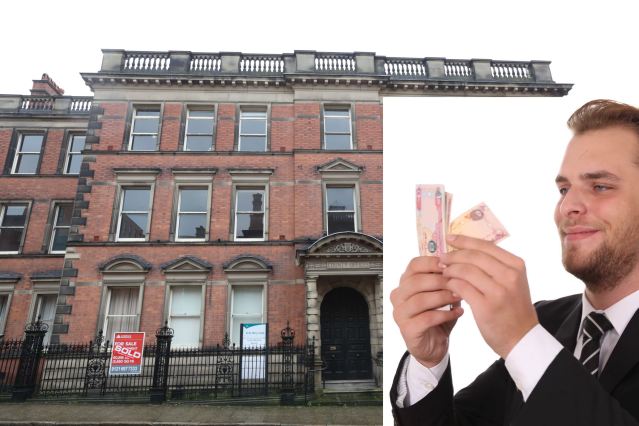 Apart from the flats not living up to expectations, facilities being delayed, and coloured running water, the Agency has refused to conform with Government guidelines and waive the 3rd term rent fees. The Competition and Markets Authority’s guidance is that customers should be allowed refunds where

“no service is provided by a business, for example because this is prevented by Government public health measures”.

The local Universities have waived their fees due to Covid-19 lockdown.

“We are a new private landlord, meaning that the rents we receive are fundamental to ensuring the business survives…”

Why is this relevant to Derby?

The background to this was covered in my article “Does the Council actually know who it is selling St Mary’s Gate to…and who will profit from it?”

Severns Rentals, is the trading name of Severns Property Ltd. The company was incorporated on 11 February 2016, 100% owned by Mark Cavell ( Adam’s father)  with assets of just under £4k, and no employees (28/2/2019). It publicises 2 properties in its portfolio – The Radford Mill site and one in Sheffield. It does not own these properties.

“the landlord”, in relation to a tenancy, means the person who is the owner of that interest in the property” s21(1) Landlord and Tenant Act 1954

Severns Rental is therefore not the Landlord. 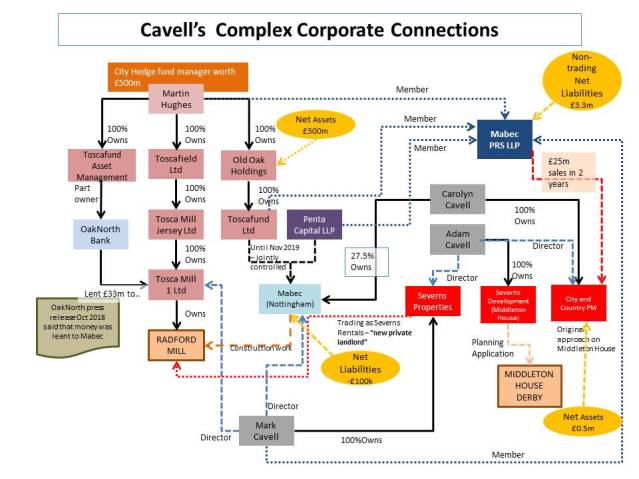 What is the link with Martin Hughes and Penta Capital.

Until November 2019, Martin Hughes, through his Toscafund Ltd, and Penta Capital, owned 50% of Mabec (Nottingham) Ltd. It had 3 directors, Mark Cavell, Mark Elliot and Steven Scott. Scott resigned when Hughes and Penta Capital pulled out.

This happened at the time that OakNorth bank publicised a £33m loan to Mabec Property.

Who is OakNorth Bank?

Launched in 2015, it lends money to small and medium businesses. In October 2017, it received a substantial investment from Martin Hughes’ Toscafund Asset management.

The press release stated that the funds were leant to Mabec Property ( albeit a dormant company) to develop Radford Mill, and the Sheffield location. The active company is Mabec (Notingham). The £33m was not reflected in its 2018 accounts.

Who actually received the funds for Radford Mill?

Tosca Mill 1 Ltd ( the current owner) registered a charged over Radford Mill in September 2019 in a contract with OakNorth Bank.

Incidentallty, the Sheffield property, is owned by Jersey based Toscafield Property 2 Ltd. Its single shareholder is  Mabec PRS LLP (Members – Mark Cavell, Mark Elliott and others) who in turn is owned by Tosca Penta PRS Ltd Partnership, which is fund managed by Penta Capital.

Both Tosca Mill 1 and Toscafield Property 2 have binding arrangements over the finances with OakNorth Bank.

What happened to Mabec ( Nottingham) after November 2019 when the institutional shareholders pulled out?

The ownership was left with the 4 individual shareholders – 27.5% is owned by Carolyn Cavell, wife of Mark, mother of Adam

Carolyn Cavell is 100% owner of City and Country Property Management. This company made the first approaches to Derby City Council to buy Middleton House. Adam Cavell is a director, with Mark.

In a comment against my original article Adam Cavell, said:

“The purchase of St Marys Gate is a straight forward purchase which is funded entirely from private family funds. There is no involvement whatsoever of the city hedge fund manager Martin Hughes, Tosca Penta, or Mabec Property and nor is there any involvement, as you suggest, of any off-shore ownership or city leverage”

What does City and Country Property management do?

A quick review of its website refers to projects which are Mabec projects including Radford Mill.

The accounts don’t reflect the fact that it made “sales” to Mabec PRS LLP ( a non-trading Limited Liability Partnership) of £5.3m in 2017, and £19.2m in 2018. The company financed by City institutions influenced by Martin Hughes and Penta Capital.

The notion that Severns Rental Agency is a ” new private landlord” does not bear examination. It is not the owner of Radford Mill, it has not invested capital into the accommodation – all of that is lost behind the complexity of off-shore companies. The refusal to be sympathetic to the plight of Nottingham students on the back of a fragile business situation is disingenuous when Mark Cavell, who owns the “Agency”, controls  the companies that own the property, has developed it. and is backed by City institutions.

It raises questions as to why Mr Cavell feels the need to be coy about his relationships, and corporate links. This doesn’t bode well for the future tenants of one of Derby’s listed buildings

Meanwhile for 400 students in Nottingham who are “private individuals” will have to find £2500-£4000 each to pay the rent despite clear Government guidance to the contrary.