Does the Council actually know who it is selling St Mary’s Gate to…and who will profit from it? 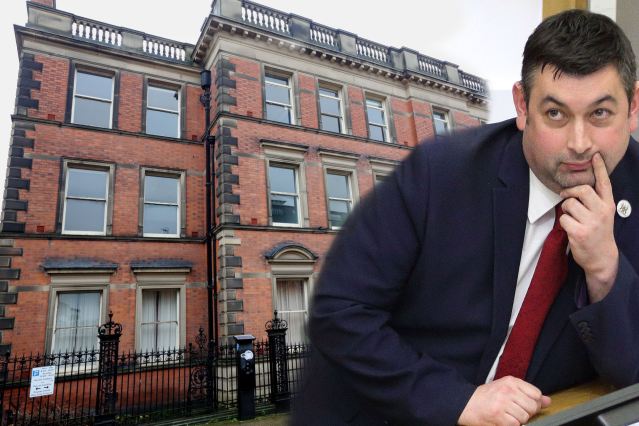 In September 2017, Cllr Martin Rawson “handed over the keys” to the 61,000 sq ft of Council buildings on St Mary’s Gate (Middleton House) to Adam Cavell, Director of City and Country Property Management Ltd (CCPM Ltd)  – based in Nottingham. This was publicised on the Council’s news website which described the new owner as  having

“…a track record of a number of high profile acquisitions and working on often challenging development sites.”

A link was given to a website. The only problem was that it was a link to City and Country Construction Ltd’s site, an unrelated  company based in Stansted who clearly have a track record on “high profile acquisitions”. An easy mistake to make, or deliberate?

The CCPM’s actual website is much more sparse on detail. The links to past, current and future projects are all direct copies of those on the website of Mabec ( Nottingham) Ltd. CCPM Ltd is a small company, wholly owned by Carolyn Cavell with no legal connection to Mabec. In addition to Adam, the only other director of CCPM Ltd is Mark Cavell. Its accounts show limited activity until 2016, when it made a £300k profit. There is no evidence of a “track record” or any history of development despite Cllr Rawson stating:

“I am delighted to say that we’ve reached an agreement with City and Country Property Management. This developer has a strong reputation and commitment to sensitive redevelopment of these Grade II listed buildings and the proposed development will further increase city centre living capacity”

Was Cllr Rawson assuming that they’d sold it to the other “City and Country” company?  Was he covering up for the fact that the company Cavell represented actually had no track record as an independent company?

So who is Mabec (Nottingham)

Mabec (Nottingham) is a property development company. By 31 October 2012 Mabec was technically “broke”. In the following year, investments by City institutions resulted in a re-structure and an injection of capital by Tosca Penta Property Limited Partnership of ~ £1.4m ( giving it 50% control) and a loan of £3.3m, paying 10% interest, from Penta Capital LLP. Carolyn Cavell who was also a shareholder saw her shareholding dilute to 14%; Mark Cavell remained as a Director.

Tosca Penta Property Limited Partnership is itself owned by a network of companies, many of them dormant, or with little in the way of assets ( see chart). Majority ownership tracks its way back to Old Oak Holdings Ltd which is wholly owned by Martin Hughes. Hughes is a “hedge fund manager” with a personal wealth of £365m, and is often referred to, in the City, as “The Rottweiler”.

Mabec’s  current significant projects  ( also shown as being CCPM Ltd projects on their website) develop properties totalling £7m NOT bought by Mabec. Mabec’s net assets had dropped to £61k by 31 October 2016 (unaudited) after the £300k pa interest to Penta Capital LLP. The properties are bought through Jersey based (offshore) subsidiaries of Toscafund Ltd – a company wholly owned by Martin Hughes, and unrelated to the Mabec shareholder, Tosca Penta Property Limited Partnership. 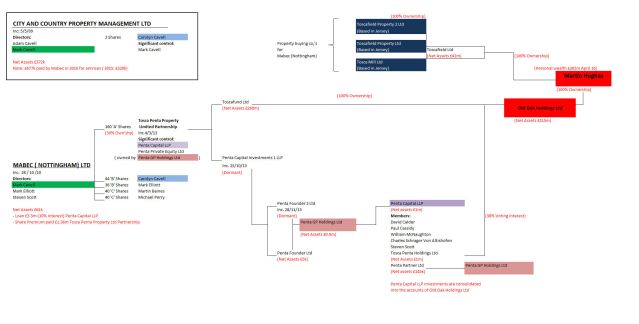 State of the Sale of St Mary’s Gate

Despite the publicity in September, the property is still owned by Derby City Council ; no keys have been handed over. The sale is awaiting planning permission; if the application is not passed, the sale will fall through. With substantial backing from a City institution this is unlikely to be a problem. The value is expected to be of the order of £0.75m.

The prospective sale price, and purchaser is  still not, yet, a matter of public record.  Based on recent history, it is most likely to be a new Jersey based subsidiary of Toscafield Ltd, owned by Martin Hughes.

Based on simple research it is easy to establish that City and Country Property Management Ltd does not have the history that was stated in the article, and is not the company in the link. Who is misleading who, and why?

How did the Council think that CCPM Ltd could raise ~£0.75m, when it only has a net asset base of ~£0.4m – this is propped up by the supply of building services to Mabec?

Why was Adam Cavell presented as the face of the purchase when he has no executive responsibility for Mabec or any of the likely funding streams?

Why was the Council not open about the fact that the property would, most likely, be under the control of Martin Hughes – City hedge fund manager? Were they even aware of this potential position, and that it could be owned offshore?

With this significant City leverage, can the Council assure the people of Derby, that it is getting the maximum price for the property – necessary to ensure future capital loans are minimised, and Council Tax increases contained?

Why is this important? 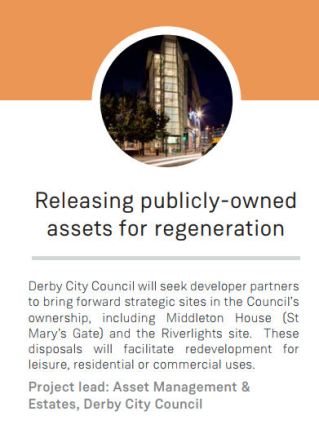 Middleton House is quoted as a “strategic site” in the Council’s Masterplan 2030.

It is stated that they will work with “developer partners” – that implies that, as partners, they will be involved in a number of projects, for the long term. It is only right that there is transparency over who the partners are, who is funding them,  and how this partnership is in the best interests of the residents of Derby.

The Council has an ambitious capital programme over the next few years which will either be funded by capital receipts ( such as from the sale of Middleton House) or by interest-bearing loans. To the extent that it is a loan, the interest has to be paid out of revenue funds, which will directly impact on Council Tax.

As the Council has been heavily criticised by the external auditors over the management of finances, and the valuation of assets, it is appropriate that such sales as these are scrutinised – particularly as the likely buyer is an astute, City hedge fund manager with a track record of being very profitable.

A number of attempts have been made to contact Adam Cavell with no success.