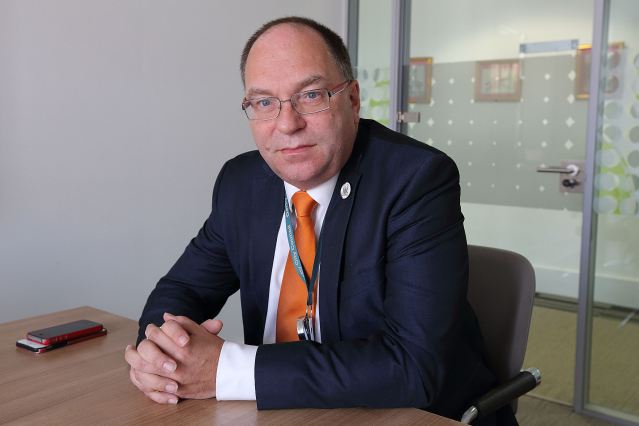 On 20th September 2017, in Full Council, Cllr Paul Bayliss ( Labour Alvaston, ex-Leader of the Council, and Deputy Mayor) made a statement regarding a complaint (re: refuse worker pay , and Webhelp) raised against him by Cllr Banwait in 2016. This was  following the publication of the Grant Thornton Public Interest report. Cllr Bayliss was cleared of any impropriety in a report issued to him on July 5th 2017 ( a year later)

In Cllr Bayliss’s statement he made a few pointed comments about Cllr Banwait’s motivations, abilities, and leadership style. In an interview I had with Cllr Bayliss the following week I took the opportunity to explore some points that arose from that speech and the outcomes from the audit reports.

[Derby News] : It is unusual for Cllrs to make such statements in the Council meeting. Why did you decide to do it, and who were trying to communicate with, other than fellow Cllrs?

[Cllr Paul Bayliss] : “….I made a statement because I felt that the Council hadn’t dealt, in an efficient and effective manner, with the complaint against me… and, in my opinion, squandered a huge amount of money, which is something that the public would be interested in, and a matter of public record.

Also….my personal reputation was being questioned and I take that very seriously. Others might not, I do! I work for the Police, I’m a Councillor, and I’m unique here in that I’m bound by the Police Conduct and the Council system so I have 2 sets of rules to adhere to.

….I’d had the report since July 5th and nothing had been done about it. That didn’t impress me frankly and I thought it was about time something ought to be said.

The positive thing that I got out of it was that it was investigated by  lawyers, independent of the Council, and retired Police Officers. That’s great for me, but not good for the public purse….£79,000 is an absolutely appalling waste of public money….in my opinion”

I think the Standards Process in this Council is broken”

How would you describe your leadership style when you were Leader of the Council?

“My skills in the past have been that I’ve run a small business and a director of a company and have managed staff. … That gives me a unique perspective and I think I brought those skills to the fore and when there were difficulties I resolved them.  Particularly the issue about refuse workers – and as a Leader of the Council, the responsibility is to spot problems, and resolve them. Not cause a massive crisis over them…and there are issues that I would have done differently.

We should never , ever, have given up on the Darley Park concert. We should have tried to do it a different way and, lo and behold, a couple of years later, they’re trying a different way….It’s the same with the arena – we should be further down the track in making that commercial, at the moment”

…and your views on the current leadership style?

“There is absolutely no doubt that, what they do, and what has been done, probably wouldn’t be what I would do! Simple as that!.

One thing that I did when I was Leader of the Council was that the Chief Exec had talks with the staff every 2-3 months and I used to go along so they could ask any question that they wanted to, as I thought that was important. When we had the issue with the Incinerator, I went to Sinfin, I stood in front of people and explained to people why we had to make the decision that we did.

…and that is what you have to do sometimes…and was it uncomfortable? Yes it was! Was it my role to do that? Yes it was!

It’s about making sure that if there’s an uncomfortable decision you are seen to be part of trying to solve it.

Another one was the sad demise of the children (Philpott) on Victory Road. I took a view on that, very simply,  that we would buy the house next door, and we would knock it down so there is no longer an address of 16 Victory Road – it no longer exists . I thought it was the proper thing to do . It cost the public purse £70,000 to do that.

So by implication your view is that that’s not how the Council is run now?

How would you have dealt with the whole issue of funding constraints, and communicating it to the public?

We haven’t really had a dialogue that asks ‘What would you like us to do?’ …so have a more rounded conversation about the things that they want and be included in that – but there are no easy answers.

We still have a £10 million hole in the budget , depending on who you speak to, to solve for next March.”

Do you think it would be better if the Council was more consultative on some of the more difficult public decisions? Libraries for example

“I think we need to be positive in what we do….I’m certain on libraries, for example, that the proposal that the Council put out there in terms of what their plan is , will not be, exactly as it’s delivered. Somebody will come along and suggest something and, hopefully, we’ll be smart enough and say “ well, actually that’s a good idea…let’s change what we’ve got here” so we end up with a number of libraries that will have community groups supporting them and have a mixed delivery model – they won’t  all be the same. I’m pretty certain it won’t be as currently written.

One of the things I’m picking up is that they’re asking people who are not used to writing a business plan, to write a business plan…it isn’t easy…..and if you’re not in the business of libraries how would you ever be sufficiently experienced to write that business plan – I think we need to think about how we do that.”

The recent audit report highlighted the issue of property valuations which would have extended from when you were the Leader. What did you know, what could you, or should you have done to avoid this?

“At no point while I was Leader of the Council did any auditor flag up any problem with the valuation of the properties. I don’t know why it came up other than the fact that officers  ‘ turned a stone over’ and saw that it didn’t look right. There is a problem valuing many public buildings as it does assume that there is a buyer out there for them so it is a bit of an ethereal concept in that respect.

There are 2 valuations that they do, one is for insurance purposes – if it burns down, like the Assembly rooms,  you can replace it…or if we have to sell it, so there are 2 values in there…..and it was the re-build value they had to re-do, the value to re-build them all….they got that wrong. The commercial value would fluctuate depending on the state of the market.”

On the subject of the Assembly Rooms, do you think there is an issue with that having been undervalued for insurance purposes?

“You’re quite right to question what the Council valued the Assembly rooms at . I think there was a question mark over how that came to be in terms of the final insurance pay out …I think you’re right, there was a problem. You can see that from the valuations that they had to re-do – the 2 are logically linked – the extent of which, I don’t know. Could it have been under-valued? It might well have been …as if it had been the proper value, would you have been able to replace it? Well, you might have been”

Previous Derby News article questioning the insurance valuation of the Assembly rooms as the underlying reason for it not being re-opened after the fire.