Jamie: Derby Poet – making the ‘Best of a Bad Situation’ 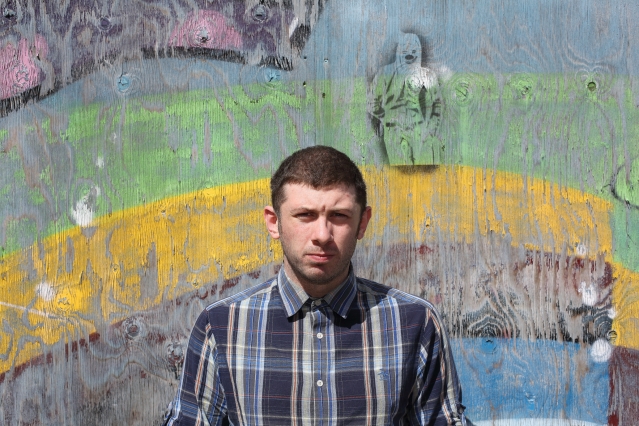 How different would Jamie’s life have been, had his surname not been Thrasivoulou?

Born to very young parents, in 1984, in Alvaston, when money was very tight, in a household that was “complicated” – it was always likely to be problematical.  To be seen to be “unusual” at school, by virtue of one’s name, alone,  paved a painful direction for Jamie’s early in life.

“ It was a bad time,  I knew I was different, I was never treated as English, even though my parents were born in England. I had to learn to stand up for myself. People at school picked on me, spat in my hair, and I always ended up in fights. It’s from this that I have always related to being , “part of the other” “

This started at infant school. When he moved to Markeaton Primary, it continued. One of his teachers, couldn’t say his name, took an instant disaffection to him, and was notoriously physically abusive – “ she was from a different century”. From her behaviour:

“ I developed  massive confidence issues, and I was led to believe that I wasn’t bright, so I didn’t try at school….I just ended up fighting all of the time”

Then to Allestree Woodlands;  he was from “out of the area” and considered a “scruff”, and so the fighting resumed – to establish himself in the “hierarchy”. His pent up aggression was channelled into sport where he excelled in Rugby and athletics – and, succeeded in  representing the County.

His real dream was to be a rock star. His Dad was in a punk band, and the thought of the lifestyle appealed to him. He joined a band and at 14, they played their first gig at the Victoria Inn, near the station. Jamie was lyricist, and singer, –  this provided an early outlet for his creative side.

Jamie managed to get enough GCSE’s to get into 6th form. This was more as an opportunity to spend time with his mates, rather than a stepping stone to University which was never a real prospect…at the time. His lifestyle became increasingly more “experimental” with drugs and drink.  At the age of 17, following a difficult time at home, he moved out, and lived with friends which Jamie describes as a “recipe for disaster” – this led to a prolonged period of self-destructive behaviour.

After he left school, life got worse, he went “…from dead end job to dead end job”, until at 20 he landed the “dream job” at Reveal Records –  working in a music store, being in a band, DJ’ing at the Rock House…..that was, until, it all tragically ended.

Life then went downhill,  mixing with the wrong crowd, fighting and getting into trouble with the Police. He found himself staring into a dark place…but had the presence of mind to reflect consciously.

”I thought….If I don’t do something, it’s only going one way, and it’s going to keep going that one way. I’d seen people that had carried on  down the road I’m going and, so I ultimately know where it leads…and I wasn’t really sure that I wanted that to be the only mark that  I leave on this Earth “

You were doing wonders by creating startup-business opportunities for the local community—Oh, back in the day, when drugs were merely a commodity,

Which by the end of the night would end up external: particularly if the conversation one-had-with-oneself were debased in content,

In a world of faceless disease you found your place to be useful, youthful, and truly truthful, you shared the love equally: did your bit for the big bad society

Monsieur Hammond and Madame May could learn a lot from geezers like you—on how to boost the economy.

Jamie then decided to study Law. His regular “meetings” with the Police had prompted a fascination with the subject. Because of his lack of qualifications he had to start with a Foundation Degree.

Then unfortunately a number of events coincided in his life – the band split, and his Nan died. She had withdrawn herself from socialising, and was largely house-bound, and Jamie found out about her death from the Police – the long-time adversary – the “enemy”. This weighed very heavily on his conscience, and led to the feeling that he had abandoned her.

Without the creative outlet of the band, Jamie started writing – nothing in particular – just words describing emotions and stories. There was no name for it. He had the idea of writing a novel.

The time was right to re-focus on his university work. Law was perhaps not the way forwards… but what to study? Inspired by Martin Illingworth and Ted Hill who had been positive influences during his times at School and University, he chose American Studies.  And then… with what subject?  He met a mate who suggested the Creative Writing course – the fit seemed perfect, so Jamie signed up straightaway.

The reading list he found to be “amazing and enlightening” and was full of books that he had skimmed across during his early years. Whilst at the University of Derby, he met Matt Clegg, a poet, and a profound influence on him, who suggested that what he was writing was… “poetry”.  This didn’t feel right to Jamie, as he didn’t see that he conformed to the stereotype “poet” – whatever that might be.

But don’t take that for arrogance; it’s just

That, much the same, I hold the consensus that

My voice mustn’t remain confined or restricted by a categorical mistake,

Just because I’ve only existed – correction: survived and thrived – more than subsisted – in the lower echelons of this

Classist-system, trapped in the race towards worst place.

He took the encouragement and performed for the first time at the QUAD  towards the end of 2008.

“ I hated it….I felt so vulnerable”

Doing gigs drove the drinking, and his old self-destructive lifestyle re-emerged. In his 3rd year at Uni, when Derby played Forest he went on an all-day bender.  This resulted in some scuffles, and more trouble.  Although not a good place, he managed to get a 2:1 in his degree course, but the whole episode was another wake-up call. He simply must tone down his drinking and drug use.

When he met his partner in 2012, she was able to influence his behaviour – slowly, but he continued on the alcohol, slightly abated. He was still struggling with self-loathing and confidence issues.

Your dark-side will always exist

It’s simply a question of how much you indulge it

It chases you down

The never-ending stairwells of despair—

There’s no magic pill for the mental my dear—

The Derby: Forest game in 2014 led to a different memorable occasion and in December of that year, Jamie’s daughter was born. The pregnancy was THE moment which kick-started his future. He needed to earn a proper income, and the writing would only serve as a hobby – he felt. He picked up from his younger days as a painter and decorator and became self-employed.

In the baby’s first year, he became addicted to FIFA football computer game. He was not writing much, not performing , and not drinking. – this was a different distraction. His partner realised that he was spending too much time in the house, not following his creative spirit, and encouraged him to get back to the writing, and sharing his work. This was a significant turning point, and during 2016 he performed 70 gigs and started submitting his poetry to publishers.

I was doing less work, so I was suffering financially, but I was happier as a person, because I was performing more”

In August 2016 he submitted poems to Silhouette Press for a project they were working on. Although they didn’t accept his poems for that initiative, they wanted to work with him on publishing a collection…which is due out in May 2017.

Over the last 18 months his time has been blighted with bouts of drinking but since February 2017 he has stopped.

“I’ve got the view now that I will abstain for the rest of my days.

Because I’m doing so much good in the creative world, that I don’t need it. My buzz is coming from writing”

He’s been involved with projects with Leicester City, Derby County Community Trust, established his own Creative Writing Courses,  spoken word events “WordWise” which brings established artists together with local emerging talent at the Maypole, a Heritage Project on the subject of Green Lane…and more.

Recently he has been commissioned by a social photographer, Jim Mortram to write a poem for the introduction to his new work “Small town inertia” – also writing a preface is Paul Mason, the Guardian journalist.

On May 20th Jamie will be head-lining at a gig timed to precede the General Election and help inspire people to vote.

“If I can do anything to try and galvanise people to do something about what is going on now then that’s what I have to do and I’m in a position where I can do that through spoken word,  and through poetry.

No doubt, he will have more to say on this subject ….

Jamie’s career is moving fast through sheer determination, hard work, passion, grit, and a body of work based on brutal honesty, so the future is “rosy”?

“The future?…what worries me?. I have a little girl, and she has a Greek-Cypriot surname, when I know about my own past, it worries me. I’d like to think we’re in a more multi-cultural and accepting society but when I look at the way some were celebrating the Brexit vote….”

They’re here to steal those jobs you seek

They’re here to steal those jobs you seek

Or arranging the bouquet which adorns your window

Or serving your McDonald’s hangover breakfasts

Whilst you English White-Trash sit and stay at home; death by daytime telly, lapping-up your dole,

They’re here to steal those jobs you pretend to seek

They’re here to steal those jobs you pretend to seek

They’re here to steal those jobs, that you — wouldn’t wanna do

Jamie’s Collection of poems is called “THE BEST OF A BAD SITUATION” details via his website http://www.jthras.com/