Over 2700 people have signed a petition to save the Alvaston Park Mad Hatter’s cafe….and counting.

Link to the Petition HERE

Brian Farthing, the lead petitioner, arranged a meeting with the Council to hand over the signatures and present the views and concerns of the people. Despite giving due notice, the Leader (Cllr Banwait), Deputy Leader (Cllr Rawson), Mayor (Cllr Winter) and Deputy Mayor (Cllr Whitby) couldn’t make themselves available for 10 minutes. Cllr Eldret ( Cabinet member) was also approached today, but advised that she was in a meeting. The petition was initially received by Cllr Graves – Ward Councillor for Alvaston, and then later on Christine Durrant ( Deputy Chief Exec) joined the meeting. 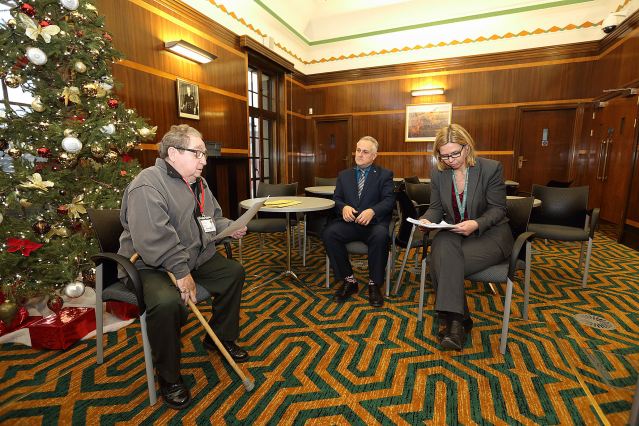 Mr Farthing read a speech which summarised the community perspective. He proceeded to say:

“The service and product they supply is better than anywhere in our area, Derby City Council should be encouraging small businesses to thrive not running roughshod over them and taking away their ability to build their business and bring their community together with a cuppa and a bite to eat.

This is not just a cafe in the Park, this is a place where people who live alone come to meet others. Without this cafe they would see no one particularly through the dark nights.

6 years ago, Carrie Whetton and Dawn Ford saw an opportunity to start up a cafe in an empty space within the Alvaston Park community buildings. It was their idea, their initiative, and their hard work to get it started. The building is Council property so a formal lease agreement was signed. They were of the impression that there would be no issue in the lease continuing to be renewed. There was kitchen equipment required to buy before opening costing in the region of £20,000 – paid by them personally. The lease was set at £5500 per year, and Carrie and Dawn agreed to clean and maintain the toilets as part of that arrangement. This photo of Mad Hatters Tea Room is courtesy of TripAdvisor

The cafe is open every day with the exception of Christmas Day, and New Years Day regardless of weather and footfall. Their ethos is around creating a community facility, selling fresh, home-made products at very reasonable prices. They could earn more money if they increased their prices but that is not their objective. The cafe supports 7 staff, essentially breaks even financially, but most importantly of all, has a significant, loyal and appreciative following.

The Council obviously feels that it can exploit this loyal and substantial footfall for its own financial gain.

The Council has chosen not to renew the lease from 1 April 2017. This is not because of Tory Government cuts, or austerity it is quite simply a local decision.  The Council keeps telling the residents that it must focus on “statutory services” e.g. adult social care, children’s services, refuse collection, education etc and yet the policy, now,  is to bring the cafe in-house. Catering is not a statutory service.

The Mad Hatter’s Facebook Page was full of positive support. This from Ian Richardson captures the sentiment:

“The park will just not be the same without you. You have been a real asset and have created a warm friendly welcoming cafe. Amazing customer service. great food that don’t cost the earth. What more could you ask for. It’s a real shame that the council yet again take something fantastic that really works and destroys it. It’s a crying shame you’ll be missed loads from the park but we will follow you to your new beginnings. We love you all x”

The Council’s financial problems are in the £millions, and to balance their budgets it needs to focus on key services. This cafe will make a few thousand pounds a year for the Council and for that, the Labour Group – for it is their choice, and theirs alone, are prepared to “sabotage” 6 years of hard-work and a thriving community facility. The Labour leadership should really reflect very closely on who they feel they are representing when making this decision – it is certainly not the residents of Alvaston, and the users of the Mad Hatter’s Cafe!

At present the Council have not entertained any options that involve Carrie and Dawn continuing to run the Cafe under their own control.