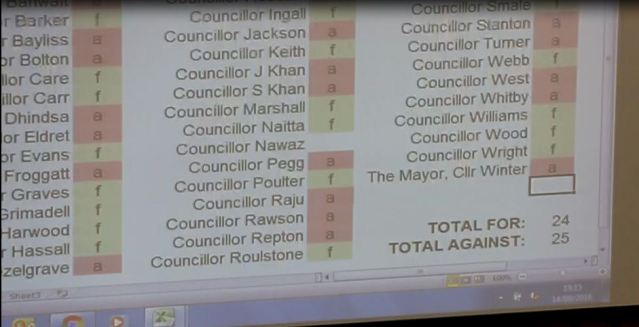 Motion carried by 1 vote – all Labour Councillors voted against it!

In the Full Council meeting today, Cllr Ruth Skelton (Lib Dem) proposed a motion to volunteer Derby as a pilot area for implementing improvements to combat electoral fraud. This was based on the national Sir Eric Pickles report ( in his role as the Governments anti-corruption champion)  which cited Derby as a high risk area.  The motion stated

“Council resolves to write to Government to volunteer Derby as a pilot area for photo ID to be shown by all voters at poling stations at the next Local Government elections in 2018.”

This would have sent a powerful signal to people outside of Derby that this City was serious about dealing with fraud.

There was a recorded vote and every Labour Councillor , including the Mayor, and the Police and Crime Commissioner voted against the motion. It was NOT carried.

The speeches from Cllr Banwait and Cllr Shanker, whilst not addressing the motion, used the opportunity to attack the Conservative group in the Council about who knew what, about the fraudulent nomination and election of Richard Smalley. He was elected as the Councillor for Allestree in the May 2016 elections. He was subsequently found guilty of lying on his nomination papers and is now in prison. The questions were legitimate and certainly need to be answered. I understand from sources that Smalley was not a “lone wolf” when it came to knowing that his nomination was not legitimate.

It is a sad day for the City of Derby when the Council voted against trying to combat electoral fraud – there was an opportunity to make a small, but significant step – and it was snubbed. What are the Labour Party trying to hide?

As Cllr Skelton noted, it is more difficult to borrow a book from the local library than it is to vote in the local election. Every Labour Councillor should hang their head in shame – but let’s be clear they were instructed to vote against this motion, by Cllr Banwait!

Council welcomes the publication in August 2016 of the review into electoral fraud carried out by Sir Eric Pickles in his role as the Government’s Anti-Corruption Champion.

Council further welcomes the 50 recommendations contained in the review. In particular council wishes to see:

a) Photo ID being required by voters and proxy voters at polling stations, along the lines of the system already in use in Northern Ireland

c) Tightening of the law/rules regarding postal and proxy voting.

The review also advises that systems for voter photo ID at polling stations should be piloted and suggests doing this in areas that are considered at higher risk of electoral fraud.