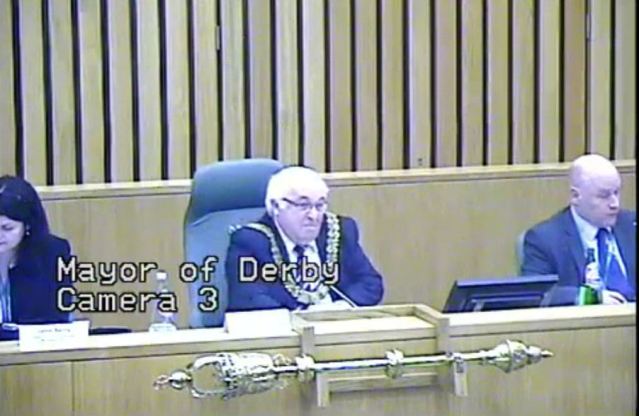 After nearly 4 months of investigation into an incident that lasted less than 1 minute, Janie Berry, the Council’s Monitoring Officer finally concluded in a way that any objective person would have done straightaway. Why, when this took place on 3 February 2016, it wasn’t resolved, promptly, prior to the Elections, is something that we can all speculate on.

Mr Cooper, the person addressed by Cllr Pegg, was in the Council Chamber as a member of the public; he had submitted written questions and , in line with standard procedure was allowed to ask a follow-up verbal question, if the written response was not acceptable for any reason.

The video clip starts with Mr Cooper being asked if he wanted to follow-up – which he decided not to. As he was the last questioner, then all members of the public were asked to leave the floor which, again, is normal practice. What was not normal was the fact that Mayor challenged Mr Cooper  on a matter which was nothing to do with any Council business, or any questions that he had asked – and was merely a personal matter for Cllr Pegg. The Mayor exploited his position as the Chair of the meeting to embarrass Mr Cooper and, the feelings of the other Councillors, and a full public gallery, are clear from the video clip. No doubt some were enjoying the Mayor’s odd behaviour.

The clip finishes with the Mayor refusing to give Mr Cooper a right of reply.

It is important to note that the person Pegg refers to refutes the claims made by him and wishes that Pegg refrain from using her for political gain. She is a friend of Mr Cooper.

It is pertinent to highlight that Mr Cooper is a resident of Mackworth ward, and was subsequently nominated to stand for UKIP in opposition to Pegg at the May 5th election. His intention to stand was known about in February and did not arise because of this incident.

– which was a very poor excuse. If he felt that way, why not just request Mr Cooper to make contact with him at his office – there was no need to bring out all of the other accusations. Notwithstanding the fact that we all have the right to ask questions of, and about, the people who are representing us without fear of intimidation!

The final decision by the Monitoring Office was to

“uphold your complaint on the grounds that he failed to treat you with respect and that he used his position as the chair of the meeting to his advantage. It was not appropriate for Councillor Pegg, in his capacity as Mayor of the City of Derby, to have made the comments he did in the public Full Council meeting”

This has now been referred to the Standards Committee.

When his time as Mayor ended, he was formally thanked for his work, and his “impartialty” in his duties – something that was not in evidence here.