Becketwell Arena – vague “early doors” plans and a poor business case. Why is the Tory Council shy about scrutiny?

On 10th July 2020, the Council unveiled its plans for the Assembly Rooms replacement.  A brand new 3500 seat Arena to be located in the Becketwell area currently under development by St James Securities. The headline cost will be £45m.

The video, and artist’s impressions, present a very attractive proposition which will transform a very derelict part of the City. 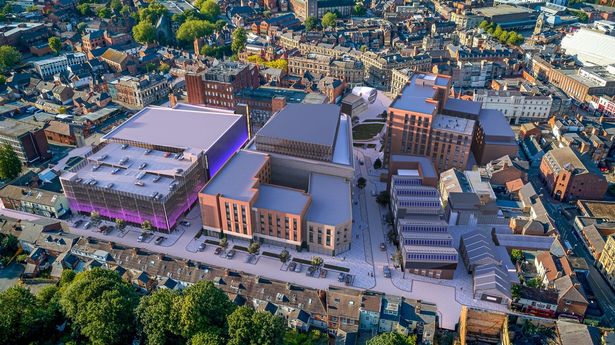 However, the presentation is superficial. There is very little substance to the proposal.

In February 2020 the Council’s Planning Committee approved an outline planning application brought by St James Securities for the whole of the Becketwell area. A significant multi-phased project, starting with the demolition of the Debenham’s building ( Site 1 – brown area – in the Master Plan below)

Site 4 ( blue – current location of Pennine Hotel and car park) was planned to be divided into several buildings, of up to 10 storeys, containing retail, residential, hotel,  and office spaces. In the few months from when the application was submitted to approval, the Assembly Rooms refurbishment project was cancelled due to costs escalating to £30m+ ( from the original plan of £10m).  Over the lockdown period St James Securities developed a radically different proposal for Site 4 – which is the proposed Becketwell Arena. According to the Council, this was an unsolicited idea put forward by St James Securities.

In the absence of this submission , the Council would still have no published plan for an Assembly Rooms replacement.

Why are the plans superficial?

The proposed arrangement is that St James Securities will design, and build the Arena for a fixed costs of  “around £45m”. When complete, the Council will buy the property from St James Securities and then lease it to a Venue operator who will pay £0.5m pa ( index linked) plus a share of takings from ticket sales and car parking. The existing Assembly Rooms will be demolished – there are no plans for the Market square location beyond that.

Cllr Alan W Graves (Reform Derby) asked many questions, including a number of detailed questions around transport links, access due to narrow streets.  Poulter responded by saying ” I have to point out this is very ‘early doors'”….and it’s ” the nuts and bolts of a proposal”…the Council will give St James Securities ” the exclusivity for a few months  to be able to develop a business case that answers all the questions you’ve asked today”

Cllr Baggy Shanker (Labour) asked Cllr Poulter what the Council would be getting for the £45m, his response ” we’ll know that when we’ve got a business case”, Shanker followed up ” So, at this stage we don’t know what we’re getting”, Poulter replied simply ” No”.

Cllr Shanker then followed up by asking whether the Council will do a full business case comparison between various options to ensure that the correct decision has been made. Poulter confirmed ” Of course we’ll consider all of the options and they’ll be brought, like this, to a Cabinet meeting for everybody to discuss”

The official position continues to be, to delegate all further action to senior Officers and the one Cabinet member. There is -no requirement for it to be further scrutinised by non-Tory Councillors.

“To authorise the Strategic Director for Communities & Place following consultation with the Director of Finance, Director of Legal, Procurement and Democratic Services and the Cabinet Member for Regeneration, Planning and Transportation to take all necessary actions to finalise and enter into all necessary contractual arrangements to acquire a new Performance Arena, with the benefit of a lease to an operator, in the Becketwell Regeneration area, subject to defined financial parameters”

Earlier in the Cabinet meeting, Poulter had confirmed to Cllr Martin Repton ( Chair of the Executive Scrutiny meeting) that all Councillors would have the opportunity to ask questions and to scrutinise the plans.

Cllr Ruth Skelton ( Lib Dem) asked about the demolition of  the Assembly Rooms and whether the removal of the car park could be delayed until more solid plans were in place for a replacement facility. Poulter was clear that the plan is to knock the whole structure down as soon as possible. It will save around £0.25m in budgetted annual maintenance costs, but the Council would also lose £0.5m income from parking fees. The rationale given was to create better visibility of what to do with the space whilst a long term option was developed.

In February 2020 St James Securities saw that the Council was desperate for a Performance Venue option and worked on an “opportunity”. The Tory administration, who’d pursued the Assembly Rooms refurbishment in the face of common sense and Officer advice, and having spent ~ £3m getting nowhere, needed some semblance of a way forwards – this was a fortuitous “get out of jail free” card.

Had they announced the proposal as a concept, with the proviso that the full detailed business case would be presented to the Cabinet, and subjected to scrutiny,  at a later date, then there would have been little concern.  But signing off a high level concept, with no knowledge of the specification or business case for the Council and then delegating the entire decision making process to Officers away from public scrutiny suggests that something is being hidden.

There are a number of questions to be answered:

1. How has the £45m been arrived at when it is still “early doors”? Is it coincidence that the headline £45m cost is exactly the same as the cost of the previous Labour adminstration’s Performance venue?

2. The £45m is not the total project cost – the Padley Centre will need to be re-housed and their building bought for an undisclosed sum; there are project management costs of £0.6m, the demolition of the Pennine Hotel is planned to overspend by £1.4m – it will inevitably cost in the region of £50m+. What is the Council’s total capital investment in the project?

3. How much is the Council paying, within the £45m,  for the risk that St James Securities is taking on the construction project?  As the plan is still “early doors” then it is likely that the “contingency” would be very high. There is the risk, as Cllr Skelton, higlighted that, if the costs escalated, then the developer will “value engineer” out the more discretionary aspects of the project, in order that they make some level of profit. How will the Council tie this down to avoid a sub-standard venue?

4. The fixed ( but index linked) revenue stream of £0.5m will be offset by the loss of takings from the Assembly Rooms car park, and the loss of revenue from the Derby Arena ( Velodrome) on Pride Park; the Council’s Arena will not be able to put on entertainment events – losing the Council £298k pa. The variable income from this proposal is still yet to be negotiated. Unless this is agreed at around £2m pa then the business case will be considerably worse than the Performance Venue option at the Market Place.

5. Why would the Council want to knock down the Assembly Rooms car park “as soon as possible” and so lose £0.5m of income, irrespective of what happens with the St James Securities proposal – or has the decision to contract effectively been made, and that this is a condition of the yet to be agreed deal. The car park income for the 3rd party operator will be a lucrative part of their business case.

6. There are many questions about the legal detail of the “forward funding arrangement” for the Venue whereby St James Securities funds the whole project in advance of being paid a fixed amount by the Council.  Whilst the project does not have the technical hurdles that the Sinfin Incincerator had, it does have all of the contractual ingredients, that could create a burden for the Council if something turns sour….which is always possible.

7. Whilst the implication in Officer statements was that the Venue proposal had fully recognised the consequences of Covid-19, this was clearly a convenient and throwaway response. The revenue stream will have to be closely scrutinised by the developer and potential operator. This is a risk for all parties.

It is clear that “sweeteners” have been offered to entice a 3rd party operator to sign up. The “gifting” of the Assembly Room car park fees, and exclusivity on entertainment events, is the cost to the Council’s finances, for recovering from the ill-conceived Assembly Rooms refurbishment plan.

If Cllr Poulter is true to his word, the more detailed plans, and business case comparisons, will be brought forward for public scrutiny, before any further decisions are made. Sadly, it is only his word that the people of Derby can rely on as,  the documented position, is the complete opposite.

We will be watching this closely.