“Landmark” building -the price for preserving Derby’s historical heritage? Time is running out! 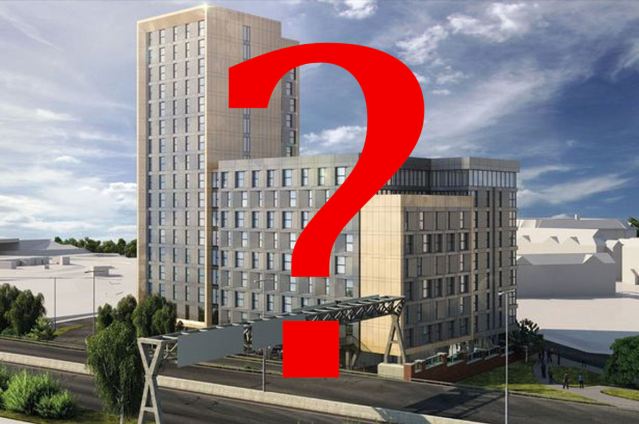 Godwin Development’s plans to build the 202 room block of flats, known as the Landmark building, continue to falter.

In October 2019, Derby News reported that the United Nations Educational, Scientific and Cultural Organization (UNESCO) were expressing concern over the proposal and its impact on the Derwent Valley Mills World Heritage Site (DVMWHS). Since then, there has been a further consultation with stakeholders and the objections remain solid, with further reports this year:

“For the avoidance of doubt, following consultation on this application in 2018 Historic England has regularly raised concerns about the assessment of impact and visualisations provided by the applicant in our written advice”

“In my view the visual intrusiveness of this building in terms of its size, height, bulky scale and dominant massing of this proposal will have a negative adverse harmful impact on the city’s skyline, upon designated heritage assets including the outstanding universal value (OUV) of the Derwent Valley World Heritage Site (DVMWHS). It is considered that the proposals would have an intrusive visual presence when viewed in approaches to and from the DVMWHS and diminish the understanding of the historic settlement of Derby and its integral relationship with the DVMWHS. This means that there will be a harmful impact on the setting of the DVMWHS and its OUV.”

Recommendation: Strongly object to this proposal on Heritage grounds.

“CAAC reiterates previous objections to the scheme on the grounds of its detrimental heritage and townscape impacts. CAAC recognises the global standing of International Council on Monuments and Sites (ICOMOS) and considers its response should be assigned the greatest of weight in the Planning balance.”

Although conditional planning approval was granted, the historical and conservation consequences remain unresolved,

Despite the objections, from even the most esteemed sources, money will speak louder. A joint response was submitted by Derby City Council’s Strategic Housing and Regeneration teams which stated:

“It should not be lost on the Council that the target for new homes from the Our City Our Rive (OCOR) area is 1,050 new homes. If that target is not met, this puts a significant proportion of the OCOR funding at risk. If this opportunity is lost, the 202 new homes from The Landmark building will need to be found from elsewhere within the OCOR programme area, which is a major challenge and may require a comprehensive Compulsory Purchase Order (CPO) programme, which may require under-writing by the Council.

“The OCOR masterplan states ‘At a city level the regeneration potential of this area has long been recognised.’ This area of the city is still some way off the Masterplan vision. The Landmark Building could and should be the catalyst for regeneration in the Derby Riverside area. Equally, the £180,000 contribution towards the OCOR flood defences will go some way towards enabling the Council to continue with the vital flood defences, which proved crucial during the recent 1 in 20 year flood scenario. There are no obvious alternative developments that could provide this contribution.”

It would seem that one part of the Council committed a flood defence project on the basis that it would facilitate new housing development, and regeneration, without there being a plan to promote acceptable projects that could deliver the requirement.

The Council has now check-mated itself!