Whilst the local elections across the country seem to have been hit by a “Brexit effect”, the same cannot be said for Derby City Council.  The Derby News predictions published on 22nd April 2019 were correct in all 17 wards based on local trends. 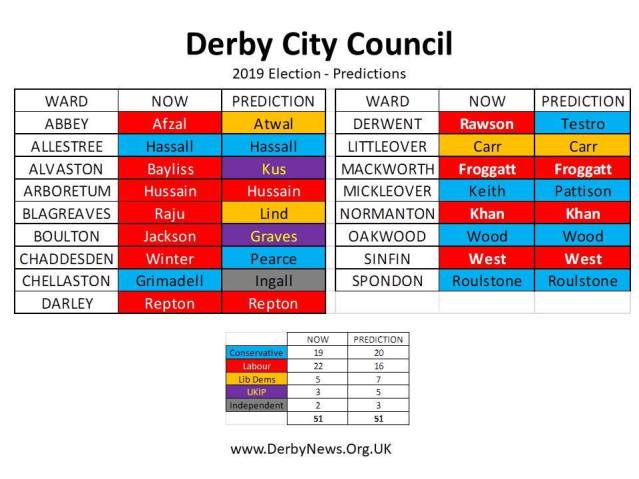 There are 9 wards where the outcome is, practically, a foregone conclusion.; whether that be Arboretum, Darley, Sinfin and Normanton for Labour, Spondon, Allestree, Mickleover and Oakwood, for Conservatives, or Littleover for Lib Dems. If any of these had fallen to a different party then it would have been a sign of a serious ‘swing’.

There was some nail-biting with the Mickleover result as the Lib Dems came a close second. However there was still a comfortable margin of 400 votes for Miles Pattison, the new candidate.

Chellaston, typically, is a Conservative safe seat, however since the Tories chose not to select Phil Ingall as their candidate in 2018 ( he was the incumbent Cllr at the time), it has thrown a signficant unknown factor into the race. Last year Ingall, stood as an Independent and lost by just 32 votes. Last night, this was overturned, and he became the City’s first ever elected Independent Cllr. Fundamentally, this was achieved by sheer hard work in the ward, and the community, giving him a distinct advantage over Alan Grimadell, the long established, but, perhaps, complacent, sitting Conservative Cllr.

The Conservatives took Chaddesden and Derwent ( making it all 3 seats in both wards); again this was through committed year round work by the whole ward team. It was helped by the fact that Labour chose not to support its ,sitting Cllr, Linda Winter, and opted to, controversially re-introduce the unpopular Sara Bolton; Bolton lost by a landslide in 2018. Derwent saw the end of Martin Rawson, Banwait’s deputy during his tenure in office.

UKIP made further advances in Boulton and Alvaston; now sitting in 5 of the 6 seats in those 2 wards. This does not signify any sinister growth in “far right views” in those areas of the City. No doubt there is a “Brexit effect”, but UKIP are well known in the south of Derby as people who are visible in the ward.

In Alvaston, UKIP’s Kirk Kus unseated a previous Leader of the Council, Paul Bayliss – one of the biggest shocks of the evening, for many.  The sitting Labour Cllr in Boulton chose to retire and UKIP built on last year’s unseating of Ranjit Banwait by securing the 2nd seat in the ward, for Alan Graves Jr.

Following last years 1 vote cliff edge result in Abbey for the Lib Dems’ Ajit Atwal, he returned determined to be successful. This May he was up against Asif Afzal who was tainted by the A52 fiasco and was an ex-Banwait Cabinet member. Atwal continued his workin the ward and successfully shifted the balance in his favour.

Blagreaves was always a Lib Dem stronghold along with Littleover. 4 years ago Amo Raju bucked the trend for Labour by winning the seat. It has always been a difficult position in that ward with the mix of Cllrs. Lib Dems nominated Danielle Lind this year, who has been working in the area for some time and is an active campaigner in the City for the rights of children with Special Educational Needs. Although, perhaps, at first sight a marginal seat, Lind won by 750 votes.

Council elections in Derby continue to be dominated by the fall out from the Banwait era, and a local party which is not truly listening. The manifesto, whilst containing some interesting points was lacklustre and the campaign showed little focus.

Labour in Derby will no doubt be blaming everyone apart from themselves for this predictable loss. Until that changes then their influence in the City, even amongst traditional Labour supporters, will continue to decline.

Despite the results, the Council is still in a position of “no overall control”. The Conservatives will continue to run the Council as they are now the largest party; they will still need the support of Lib Dems to pass Full Council decisions, or UKIP and the Independents.

A “hung” Council is frustrating for the ruling Party but it does facilitate some level of “checks and balances” which can only be good for democracy.

It is good that the Derby voters have supported people who are committed to representing them,  rather than being buffeted by the short term whims and intrigue of National politics.

Derby voters may be predictable but through this they show their true spirit!