Cllr Amo Raju was elected to the Council just under 4 years ago.  As the Chief Executive of Disability Direct, for over two decades, he has been instrumental in promoting support for disabled people in the City.

The Council needs a breadth of people across the 51 Councillors with different life experiences – not as single issue champions but to ensure nuanced debate across a very wide range of subjects.

Amo is disabled, himself. His personal journey from a young boy at school through to his status as a Councillor is a personal matter.  He had overcome hurdles which were, in his mind, consigned to history.

Last June, a fellow Councillor posted a comment on Facebook suggesting that Amo had used his disability for political advantage; this stunned family, friends and colleagues. It wasn’t Amo that complained to the Council, but the Board of Trustees from Disability Direct. After a prolonged investigation the Cllr who made the comment, issued an apology.

For Amo, an apology didn’t feel sufficient as a long term solution. The opportunity existed to use this incident to sponsor a positive outcome on the subject of Councillor training. Currently the equality training is a multiple choice question set – his proposed motion was:

“Council calls for all existing and future Councillors from May 2019 to receive meaningful and interactive workshop-based training with regards to all the protected characteristics under the Equality Act 2010 and any subsequent amendments to the act. This training will replace the existing multiple-choice based e-learning modules”

[The motion was amended by the Lib Dems to include reference to anti-semitism, and that a full analysis of the current training be conducted before any changes implemented]

In his speech which “moved” the motion in Full Council, he challenged his fellow Councillors

“Tonight we voted on the budget. Inside those budget papers were matters which will affected people living in very difficult circumstances but I ask everyone inside this chamber, before we had cast that vote, can we put our hands on our hearts and say we truly understood the daily problems experienced by people accessing social care or the numerous problems parents of disabled children face? Even if we choose to vote on party lines, can we call upon a life experience to help make that choice. Not in every case.”

and highlighted the inadequacy of the training…

“…the existing ‘induction training’ and I use the word training very loosely, the existing training consists of nothing but being plonked in front of a pc/laptop or tablet to answer multiple choice based questions after reading a couple of paragraphs about each protected characteristic under the Equality Act. If we get answers wrong, we simply go back, do it again and again until it’s right. Then the council solicitors and insurers will be happy.

But are the public happy or encouraged by this approach? Considering what I have already mentioned about understanding the needs of the communities we serve, we are not equipped with enough understanding by merely carrying out this training alone and I am confident in saying that the public will expect more”

The public would certainly expect more!

Amo then referred to the comment last June and how he felt that, in many ways, prejudice had taken a backwards step. He then spoke from the heart:

Did he understand the journey I had taken as a disabled child from a minority ethnic group who was bullied and harassed all through school to where I stand today?

Did he understand the discrimination I faced time after time in job interviews, including a job interview here in this building?

Did he understand the constant pain and muscle spasms I have just getting through the day?

Did he understand that by making that comment he affected my family, my friends and even my employer. “

And then was candid about a dilemma he faced:

“Mr Mayor, no one inside this chamber knows this but I’ll share with you today. When I won my seat in 2015, I was approached by the Office for Disability Issues in Westminster who wanted to note my progress as a disabled person entering politics at a local level. Last week they emailed me asking for an update. I have not yet said anything but I ask this chamber, what do I say? – That the barriers that I faced were not in my ward but came from inside this chamber?”

People from diverse backgrounds are needed in the Chamber, however…

“It was my life experiences that almost pushed me into politics and I hope that people with experiences from all backgrounds make similar choices to enter into public office to serve their peers. But Mr Mayor, many who have much to offer will turn their backs without a second thought on entering public life if they witness examples of their disability, sexual orientation, ethnicity or any other very personal characteristic be targeted in this way.”

“I’m not going to elaborate any further about that particular incident Mr Mayor. However, I will say this. Had that comment been racist, sexist, homophobic or dare I say antisemetic, the reaction both inside and outside the council house would have been much more condemning by all parties including the standards committee. But hey, it’s only disabled people – as usual, easy targets.

The Equality and Human Rights Commission stated to me that this is classed as a hate related incident and that I have options to consider. Derby City Council’s website talks of a Tackling Hate Crime Together Protocol. But has Derby City Council extended any support to me once their investigation was over? No. I’ll say no more on that issue. There’s clearly a lot of work to be done to internally”

In conclusion, Amo emphasised that training must be comprehensive and not cursory…

“Mr Mayor, in the motion we say ‘meaningful’ training. It needs to be interactive either in workshop-based sessions or perhaps even placement based and staggered over time. Each year at AGM we divvy out roles such as Disability Champion, BAME Champion etc. Why not give the people in those roles some teeth in facilitating training to councillors? Just a thought.

The existing level of awareness offered to councillors is insufficient and if not actioned, despite the very best legal advice by officers, may lead to discriminatory decisions which will put people inside and outside this building at risk and should therefore not be acceptable to this chamber.

Mr Mayor I commend this motion.”

The motion was approved unanimously. A number of Councillors from across the Chamber were moved to express their support for Amo, personally. 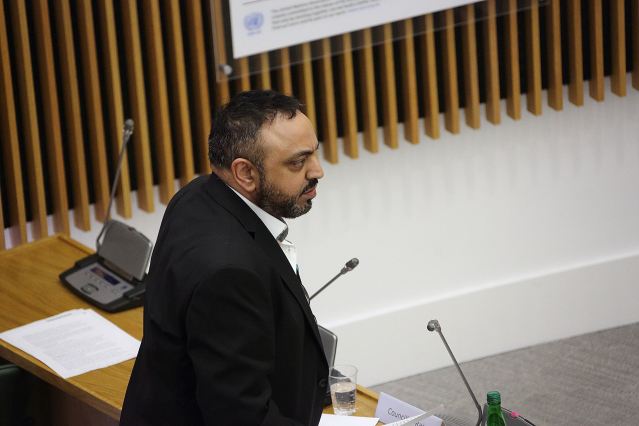 None of us can truly know what life is like in “someone else’s shoes” but we can all open ourselves up to listening and understanding in a way that makes us more informed. Councillors, more so than others, must have the best opportunity for gaining that insight.

This is one of the few occasions where I have seen something, which started as a very unsavoury incident, being used as a lever for a positive change in the way that the Council operates.