High street banks these days seem to have lost that personal touch with nearly everything being on-line, on the phone, or automated.  This may work well for some people , but for those who are uncomfortable with this trend and prefer to speak to someone directly about personal matters, and would like a more local option then, there is the Derbyshire Community Bank. (On-line banking is also available)

City shoppers may well have walked past the branch on the Cornmarket many times without quite knowing what it was all about. 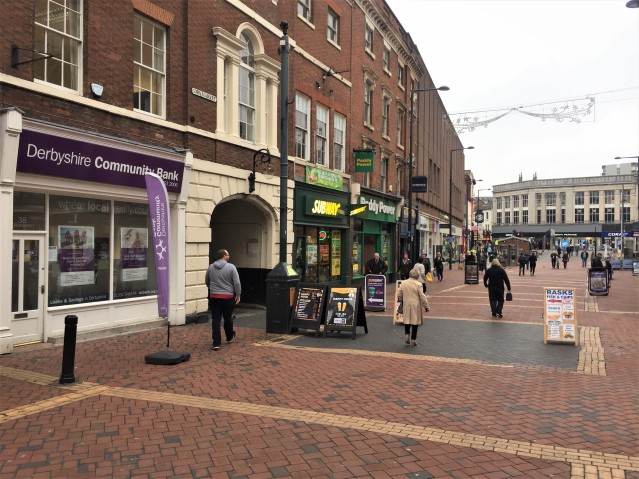 Derbyshire Community Bank has all the regulatory control of a high street bank without the need to appeal to demanding shareholders. It is constituted as a Credit Union – it is not-for profit, with trustees ( similar in style to a charity). Everyone who borrows, or saves is a member.

For people who want to save, it offers competitive ISA rates, and is ideal for people who prefer ethical investing.

Derbyshire Community Bank is not  competing with the high street banks for lending. It’s focus is on people who need to borrow small amounts of money ( the average loan is £500 – most banks would not offer such a small amount) and who may be initially drawn to pay day lenders, or “loan sharks” with extortionate rates of interest.

As Derbyshire Community Bank reviews applications personally, and in detail, it can offer people loans who may be rejected by other banks. A poor credit score is not necessarily a barrier to being offered finance, where the computerised system at a  mainstream lender will probably result in an automatic reject.

The personal touch allows them to be more flexible with repayments, particularly if established borrowers get into short term problems. There has been a noticeable impact of the implementation of Universal Credit which his resulted in people needing to defer repayments.

With Derbyshire Community Bank – if a borrower gets behind it doesn’t lead to spiralling interest rates and crippling charges.  They realise that charging someone who is in a difficult financial state is pointless – they much prefer to work with people through the temporary crisis.

Another longer term advantage of using Derbyshire Community Bank is that it is not considered to be a negative issue for credit score/ratings purposes. This is unlike the use of pay day lenders which credit agencies consider to be a form of “reckless borrowing” – this will most likely mean that any future loan applications to mainstream banks will be turned down for at least a period of 6 years.

The key to their approach, and success,  is communications and personal relationships. They have many loyal, long term members, who they know by name – not just as an account number.

For those people who want to save with Derbyshire Community Bank, their money is 100% safe (covered by the Financial Services Compensation Scheme).

Currently Derbyshire Community Bank is looking for people to lend money to. Their campaign to attract savers has been successful, so they currently have a surplus of funds.  Derbyshire Community Bank’s Chief Executive Officer, Sara Osborne is keen to encourage people away from using the high interest options as she knows how damaging that can be. Although the Bank has been regulated for over 10 years, it is more well-known in the County, rather than the City – but Sara hopes to change that in the coming months and years.

High Street banking is beginning to recover from the dent to its reputation from the wider industry excesses of a decade ago. Wonga demonstrated that exploiting vulnerable and desperate people, with 1300% interest rates, and “harmless” advertising was ultimately disreputable.

Derbyshire Community Bank ( as a Credit Union) goes back to basics with banking.  One person’s surplus money, available to someone in need of a modest helping hand.  The professional blend of banking with charitable-like objectives.