Health Champions: “Be Clever on Cancer” in Derby’s BME Community

Some of the Health champions with Beverley Powell and Nishi Madan

Health Champions from all over Derby’s Black, Asian and Minority Ethnic community (BAME/BME) gathered in a city centre hotel to continue their Cancer Awareness campaign. Nishi Madan from the Public Health Team in Derby City Council in conjunction with Macmillan Cancer Support have been working across the city to develop a small group of champions to lead this important initiative. The challenge for all of the champions has been to understand the messages provided by the health team, and then to identify the best ways to communicate these within their own communities.

It is a long and arduous process that relies on a lot of repetition to ensure that the population at large have enough awareness of good dietary practice and consciousness of critical symptoms that indicate possible cancers. This is exacerbated in the BME groups as the messages are affected by language, education, cultural issues, religious guidance, peer pressure, finances and general attitude towards health care. In this context it is a massive undertaking to overcome these hurdles and an achievement to get people thinking about how they can become more healthy and ultimately change their routine behaviours.

One gentleman highlighted that many people who were strongly religious believed that if they had a problem that they could “pray, and it will go”. Others mentioned that many that they spoke to were just “not used to accessing services”. 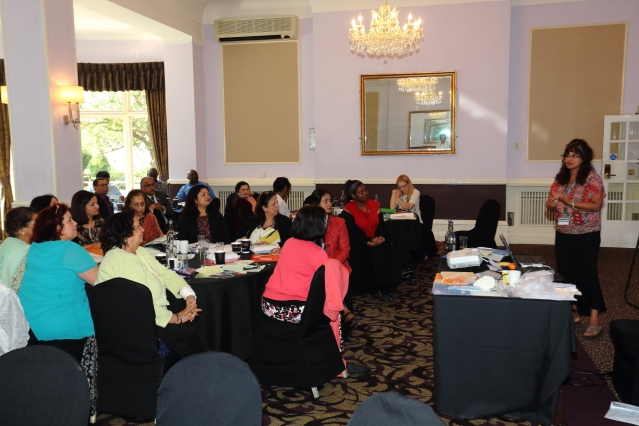 One group explained the practical activities that they had started to get their people more active which involved walks of several miles through the City to Elvaston Castle, as well as mixed football matches.

A separate session was held on Bowel Cancer Awareness by Beverley Powell who is the Specialist Screening Practitioner at the Royal Derby Hospital. It is the 4th most prevalent cancer in the country after Lung, breast, and prostate cancers, and is most evident in people over 60 years of age ( although anybody can contract it). As a result of this, everyone in the country receives a bowel cancer screening kit on their 60th birthday; this is then repeated every 2 years.  A good humoured demonstration was given as to how the samples would be taken and dispelled any concerns that it would be messy or complicated. Essentially it involves providing 2 smear samples from a stool on 3 separate occasions which are deposited onto a special letter- sized, test card, which is then sent in the post.

The screening objective is 60% of the target population; currently in Derby only 30% of the people actually return their test kits. Due to the nature of the activity, many will feel awkward about this, but the more that it is talked about in an open and “normal” way, then gradually the initiative will reach its target, and identify people in the earlier, treatable, stage.

This campaign in Derby is already demonstrating how this model of working can actually be successful, and the intention is to role this methodology out in other cities which have “hard to reach” communities.

The champions showed a great enthusiasm for the role that they were performing and had a passion for the mission that they were part of. The great value of bringing the different sections of society together was to allow people to understand how others had overcome their difficulties, and for everyone to remember that they were part of a city-wide drive to improve health.

As one lady pointed out “We want to be part of a healthy Derby”.