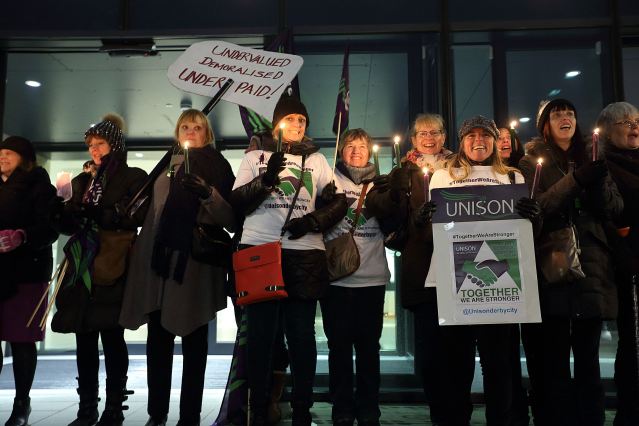 After nearly 18 months of a dispute, and 7 months of strike action, there is still much confusion over the facts, the root cause, and why negotiations are locked.

There is a broad population of people affected;  Teaching Assistants (TAs) in both mainstream, and specialist schools that look after the most vulnerable children, together with School Support staff performing a variety of different functions.  There are many variations of hours worked, pay rates, timings of changes etc, but there are some very common themes, and mis-conceptions which apply to the majority.

Q1 The strike is about a pay increase.

MYTH. No one is striking over a pay increase. They just  don’t want to lose pay.

Q2 The strike is about Equal Pay between men and women

Q3 The reduction in pay is to do with TAs/School Support no longer being paid for school holidays.

MYTH. They have never been paid for school holidays, only statutory holiday entitlements, the same as everyone else. Their contracted salary was divided by 12 simply for administration purposes.

Q4 TAs are only low-paid, unqualified staff, doing casual tasks in the classroom.

MYTH. Many TAs are qualified to graduate level, are very experienced and skilled people. TAs can have many of the teaching responsibilities of Teachers. TAs in specialist schools who are responsible, in many cases, for 1:1 support also have significant care responsibilities, including some health needs of the child.

Q5 The changes to Terms and conditions were done to harmonise them with all other Council Staff who work 9-5, 5 days a week.

MYTH. There are many permutations of detailed working patterns based on the needs of the job. Some staff, like groundsmen, whose workload is seasonal, do more hours during the summer, than the winter. Refuse collectors work 4 days a week, but are paid for 5, and get the 3-4 days between Xmas and New Year.  Most Council workers can take their Annual Leave entitlement when they like – TAs / School Support staff can’t – they have to take them during the school holidays – when travel is at its most expensive.

TAs/School Support must do all of their work within the confines of the 39 week term time.

Q6 TAs/Schools Support are Part-time staff – they are only contracted for 32.5 hrs per work.

MYTH. All staff were employed on Full-time contracts, at an annual salary recognising the term-time pattern. The 32.5 hr contract is “directed time” which is when they have to be available in the classroom. Above this they are required to do  “such reasonable additional hours as may be necessary to enable the effective discharge of their professional duties”.  This could be considerably in excess of the 32.5hrs but results no increase in pay – it is factored into the salary.

This is exactly the same structure as for Teachers, however their pay and conditions is negotiated nationally, so are unaffected.

Under the changes to the Terms and Conditions, Derby City Council have focussed on the numerical contracted hrs of 32.5hr but ignored the additional duties that are delivered. As this is below the standard working week of 37 hrs, and term-time is 39 weeks, then DCC  has “deemed” them to be Part-Time Workers., and as a result, has reduced their pay by 25%.

They are no more part-time than Teachers.

Q7 The TAs/Support staff can work to rule, and just work the 32.5hrs that they are contracted to.

MYTH. They are professional people working with children, some who are very vulnerable. They cannot just leave the classroom when “ the buzzer goes”, and leave children unattended. They know that they have signed a contract to deliver the 32.5hrs “directed” time plus the additional hrs necessary to ensure the children have a proper education.

TRUE. Now, under the new forced contract, every hour that is worked above the contracted hrs is unpaid. Which other low-paid Council worker would accept not being paid for every hour that they work? The Council will state that all overtime is paid, but, in this respect it is being very disingenuous – in practice it is not paid.

TRUE. The 2 are completely unconnected, however the Council do muddy the waters in their external communications.

Q10 The Council have also removed the Special Classroom Allowance of ~£1000 from those TAs who look after the most vulnerable children.

TRUE. And this is also nothing to do with the Equal Pay Review.

Q11 So the Council have hit the TAs twice – reduced their salary by 25% and refuse to pay full overtime for every hour that they work.

TRUE. If the Council put them on an hourly-rate based style contract, then they should pay for every hour worked. In many cases, if they were paid full hours, then they would not have a 25% reduction.

Q12. The Council can’t afford to pay them their original salary due to Central Government cuts

MYTH. The Council’s own Head Teacher’s Update states clearly that this is totally unrelated to Govt cuts. In fact the Council has provisioned for a £5.6m increase in its funded revenue budget to cover cost increases from the Equal Pay review.

So what should the Council do?

Expecting them to do the full job, and only pay for some of the hours is fundamentally unethical, archaic, and certainly not what Trade Unions and the Labour Party have been fighting for, over the decades.

If this stunt was tried on the Refuse Collectors, and they went on strike, it would be resolved in a matter of days, and as Grant Thornton noted in their 2016 report:

“The pay option adopted in October 2013 for staff subject to Job Evaluation was motivated, according to officers, by a political desire to protect refuse workers, whom Members feared, might strike prior to the May 2014 elections, if they received an unfavourable pay outcome.”

And the Council tell everyone it’s imposed on them by the Government – this dispute is as a result of choices that the Labour Council has made – pure and simple!