£60,000 for not helping the real Rough Sleepers – is that value for money? 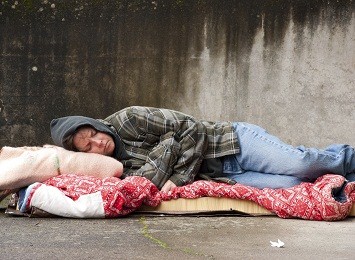 The City pays £60,000 to an external organisation to ensure that no one sleeps on the streets of Derby. So why do we have Rough Sleepers?

Every Council in the UK is supposed to have a published Homelessness Strategy and it should include the nationwide introduction of the “No Second Night Out” (NSNO) policy. In Derby this is delivered by an external organisation called the Riverside Group.

The NSNO initiative is not about actions to prevent people becoming homeless ( in it’s broader definition) but to react promptly to people who find themselves on the street – “rough sleepers”, to ensure that they do not have a “2nd Night out”. Specifically the objectives placed on Riverside by Derby City Council  are:

To identify rough sleepers and bring them into services.

To achieve the best outcomes for all rough sleepers.

To prepare a plan of action for each rough sleeper.

To liaise and consult effectively with each other in the delivery of this service.

To establish effective processes around referrals and inform sharing to achieve successful outcomes for all rough sleepers.

Target both new arrivals to the streets and those that are already entrenched rough sleepers.

One might think, that given the above, and the tragedy that is rough sleeping that the numbers of people who were in this situation would be well-known, and current. In the 2015-19 Homelessness Strategy published in April 2015, it cited a count of 47 rough sleepers in the 2013/14 year. The plan only required them to be counted on a 6 monthly basis. In December 2014, it was counted as 24, and then by November 2015, the latest count, it was declared, as 10 people – this is still current. Many would believe, including inside sources, that this number is, in reality, a lot higher.

Whether this recorded reduction over the previous 1-2 years was attributable to the NSNO strategy is unknown as there are many factors involved.

The original funding for NSNO was from the central Homeless Transition Fund. For 2015 it has had to be funded locally. Derby City Council signed a Service Level Agreement with Riverside for £30,000 over a 12 month period. On 22 October 2015, Derby Homes donated a further £30,000 to Riverside to deliver the project. When I asked Derby Homes through Freedom of Information whether they felt that this service would have been delivered without their donation – they stated not! Their view was that there was no contract with Derby City Council which there is. Riverside are receiving £60,000 from the Derby tax payer.

So does the City get value for money, and could the money be spent in other ways?

For 2015, the total number of referrals to NSNO was 591. It’s not clear how many of these were unique; many people do circulate around the system. I asked via Freedom of Information ( Riverside failed to give me any meaningful information on their performance)  how this was broken down, between the various ways in which people had been helped to avoid spending a 2nd night on the streets.

The split is as follows:

200 (34%) were moved to short term support – these are the standard Council referral hostels. .

115 (19%) – were returned to their previous address, family or friends  ( 15 were directed back to Eastern Europe)

Why when we pay £60,000 for service,  can Riverside/NSNO not account for how they helped 37% of the referrals – we have to assume that they weren’t helped!

NSNO in Derby manages the provision of basic camp beds at a few established locations around the City ( namely Milestone House , Centenary House – which also have longer term accommodation and support workers. Milestone House is the Council’s Emergency Accommodation Centre for short term homeless and is staffed by the Council/Derby Homes). If someone presents themselves to the Council as homeless, they are usually sent to Milestone House for emergency accommodation. If one of the longer stay rooms is not vacant, then they can sleep on one of the camp beds in reception. However this is not managed by Milestone House staff, they are referred to NSNO, who then allocate them to the camp bed. This constitutes a referral, and included in the 200 above.

In many instances, people appear on the street, and quickly return back to parents, or friends – with, or without the support of NSNO – this is the 115 referrals.

There are 10 people who remain as rough sleepers. One might wonder why, if the strategy was that no one spent more than 1 night on the street, this was the case. Simple answer is that these are the difficult, entrenched rough sleeper cases, that NSNO has not resolved. I have spoken to a number of rough sleepers and asked them if they have been referred to NSNO, and whether they have a plan ( each rough sleeper should have a plan). I have yet to come across anyone with a plan. A number report that they are sent to places which are occupied by drug addicts which is unsafe for them. Others, that they have been told to re-locate to another City – for which they have no connection. If initial offers are not accepted then they quickly find that NSNO back off and offer them no support. But these are the very people that need help.

I seriously question whether the £60,000 is making a material difference to the plight of people who are rough sleeping in Derby beyond what could already be achieved by the existing Council staff/support workers and procedures. Something has crept in to the way that this works that over-complicates it – and the complication wastes money.

For £60,000 the City could afford to fund 2-3 full-time people, whose sole job is to help those whose lives are chaotic, those with complex needs, to be more dedicated to working with them to find a workable solution. There are many other charities and organisations that can assist with this but it shouldn’t be about ringing up Riverside’s call centre in Liverpool, shuffling people around the system, and playing the numbers game – it should be about delivering quality, sustainable solutions that suit the needs of the person in crisis.