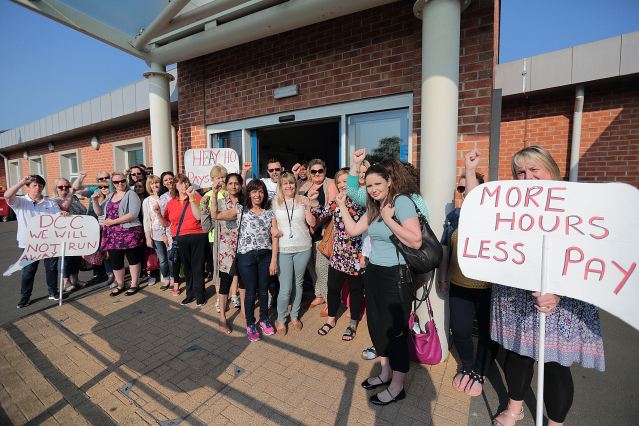 Last night, all of the Teaching Assistants (TAs) in Derby who had not already accepted Derby City Council’s new Terms and Conditions were dismissed. This resulted from the Council’s inability to negotiate a settlement with the Unions that was anything more favourable than a 20-25% pay cut. This is despite the fact that the new package fails their own Equality Impact Assessment.

This morning the TAs had a choice – remain dismissed, or return to work, and be forced to accept the only available offer.

The majority of the TAs at Ivy House school met outside of the school doors at 8am, to enter as a united group, as an act of solidarity. They had no choice but to return to work, but their determination to continue the fight is unrelenting. With the exception of about 1 person, all of the appeals from the TAs at Ivy House school were mislaid due to an “administrative error”. This was met with a huge amount of scepticism. So despite being hand-delivered to the Council just over 3 months ago, the formal process has not been followed, and so most will not know how much pay they will paid in a few weeks time. It would seem that those TAs throughout the city who have been active….have all been subject to the same “error”.

June 6th was suppposed to be like any other day – the 1st day back after half-term. But, unusually, it was re-designated as an Inset (training) day.

As the TAs gathered, grouped, hugged, and entered the building – for the first time ever they were required to sign in at reception….and to sign out at the end of the day.

This is not the end of this dispute….