JET: Police and Crime Commissioner waste £11000 of public money on a fruitless contract 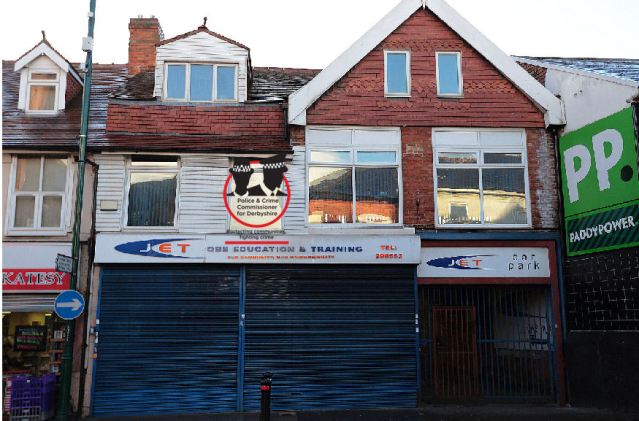 For just over £20,000 of funding from the Police and Crime Commissioner (PCC), Jobs, Education, Training (JET), of Normanton Road, committed to deliver a “quantifiable reduction in Pakistani Youth within the criminal justice system”. All within the space of 12 months. A promised feat that seems to have faltered….

On 28 July 2014, Alan Charles, the PCC, awarded a grant of £21438 to JET, to engage with 50 Pakistani youth, 15/16 years of age who were “at risk of entering the criminal justice system”, put them through a “process”, and save them from the inevitable slide into criminal behaviour.

This is a bold move from an organisation which principally focusses on  job-related support,  and associated training ( eg. ESOL, IT, Health & Well-being, Women’s fitness).  It has no prior experience of leading projects which require the sensitive and dedicated Youth Work to deliver the outcomes of the PCC grant – yet this did not seem to stop the contract being awarded.

Fortunately, Sharief, the Chief Executive of JET, is also on the Board of Global Education Derby (GED) which has a very similar project funded by the Big Lottery Fund. This is a 3 year programme worth £230,000 which was managed by a qualified and experienced Youth Worker. This programme was presented to the funders on the basis that JET had access to the “community” , and GED had the “specialist educational approach”.   The primary aim of the GED project is “To reduce the social and economic marginalisation of the Pakistani community in inner-city Derby, with particular emphasis on younger boys at risk of disengagement from the education system.”  The programme, conveniently,  covers 50 Pakistani Youths for each of the 3 years up to 2016.

When I contacted the Office of the PCC (OPCC) in February 2015 and suggested to them that these 2 programmes were sufficiently similar to warrant concern, they struggled to see the issue.

The distinguishing feature that the OPCC highlighted about the JET award was the explicit and quantifiable commitment to a reduction in the numbers of Pakistani Youth in the criminal justice system. I asked the OPCC in a subsequent FOI request how this was being measured and what the baseline figure was. They replied:

Despite work by both parties we have not been able to set a suitable baseline figure from which to judge performance for this element of the project. For this reason we have agreed with the provider that the total amount of grant payable will be reduced to reflect the fact that they are unable to evidence performance in this area.

This is the only quantifiable measure of any success, and against which value can be judged – and which has now been removed from the contract requirement. There is no alternative measure of success.

I also asked the question:

What was the process by which the “local young people” were identified as being “at risk of entering the criminal justice system”? How did you assure yourselves that they were not the 1st 50 people to be identified?

As stated we have experienced difficulties in establishing a baseline we will not therefore be making payments on this element of the project.

So there is no method of confirming that the participants were from the target population, or that there was any impact on the outcomes required, or indeed whether they were “at risk of entering the criminal justice system”

To cap it all, it transpires that only 42 people engaged (not 50) in the project with there being questions over whether 4 were in fact of Pakistani origin. So, potentially, only 75% achievement on the numbers of people involved.

JET planned to overcome the lack of Youth Worker experience by engaging someone on a part time basis. £6938 of the grant was allocated for this purpose.  When I asked for the name of the person who had been employed ( although this was not a stipulation, in my original discussions in February it was evident that the OPCC understood it to be a named person), they replied, more recently:

Our understanding is there is no specific Youth Worker delivering this programme.

The de facto accountable person for achieving the outcomes is Sharief, according to the OPCC. I am not aware that he has a reputable qualification in Youth Work.

The first payment of 50% (£10719) of the grant award was made in September 2014 when the contract was signed. The second 50% payment was due to be made on 21st April 2015 upon receipt of an interim report. Thus far, by mid-October, a satisfactory report has not been submitted and so the second payment has not been made…after 6 months.

We can confirm that to date no second payment has been made to this project. Unless we receive satisfactory performance data we do not intend to process any further payments (OPCC)

The final report was due for submission on 30th September 2015. This has still not been submitted by mid-October.

The process of transforming the 50 Pakistani youths required the following costs.

(apparently, major coverage in JET newsletter, PR and press releases – although not on JET’s own Twitter, Facebook, and no major reference on the website, no Telegraph article, or JET newsletter?)

The direct costs were planned to be:

I can’t help but think that working with young people to avoid them dropping into the criminal justice system is more complicated and intense than sending them on a few trips, teaching them Maths, English and Science and listening to speeches from people that don’t relate to them. It is not surprising that JET pulled together a programme like this to draw on available public funds to bolster their depleted resources;  this is their stock-in-trade approach.  What is surprising is the crushing naiveté of the Police and Crime Commissioner who actually thought that achieving these objectives,  by “sheep dipping” 50 youths, with no single Youth Worker,  from an organisation with JET’s reputation, was remotely possible.  The only thing we can be sure of is that the OPCC has wasted £10,719 of public money, and I expect that they would have wasted the same again, had I not asked questions of them over the last 9 months.