Project Touchdown celebrates Eid with an evening meal for the Homeless

I have written before on the great work that Zishan Fazal and the many volunteers of Project Touchdown do for the homeless and rough sleepers of Derby. When I spoke to Zishan in the early days of Ramadan this year he mentioned the idea of finding a venue in the City Centre where he could put on a meal for some of the people that his team served each week. It sounded like a great idea, and I envisaged a handful of tables and a few dozen people. Clearly I lacked Zishan’s vision.

He managed to secure a room in the modern annexe to the St Peter’s Church in the heart of the City. When I arrived just before 7.45pm, many people were already gathering outside of the Churchyard. Inside was a hive of activity of about 30 volunteers – from family, friends, and good people of Derby. They were busily preparing rice, arranging the tables with donated pizzas, samosas, sandwiches – elsewhere there was a selection of cakes, biscuits and all manner of sticky buns. Separately there was an array of clothes, bedding and toiletries – free for anyone to take.

On the stroke of 8 the queue was let in, slowly, not to overwhelm the hot-food volunteers. Within 10 minutes the room was full and there were still people waiting to be let in – queuing patiently on the stairs – an orderly convivial atmosphere. 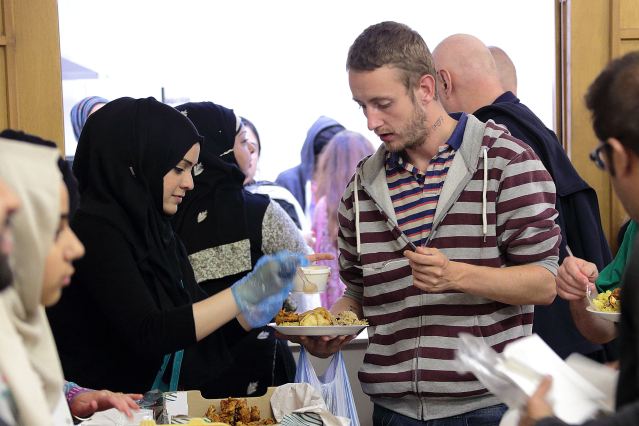 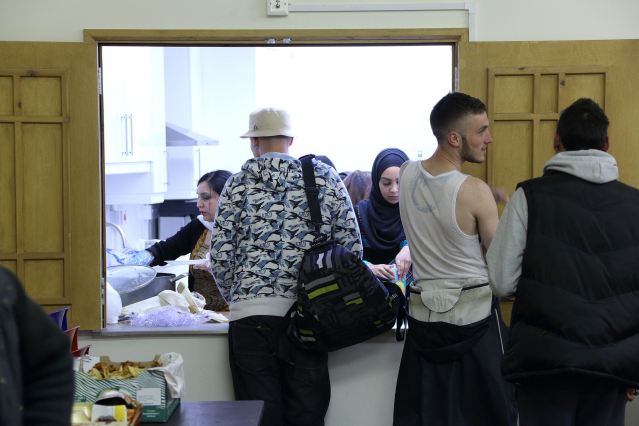 It was an opportunity to meet new people, or old friends. For some they just wanted the respite from the empty isolation of the streets, some just sat and reflected – comfortable in their own thoughts. Others needed to express their desperation with how they are battling with the Council and other agencies to stay in housing. One person was metaphorically ” kicking and screaming” to keep a roof over their head, clinging by the last splinters of their finger nails, to stay somewhere in the system – but it seemed that the final crevice was opening up, into which they would fall….and was fully expecting to be spending the next night on the streets for the first time ever. All the agencies purporting to support homeless people were turning the other way – a truly heart-breaking story. 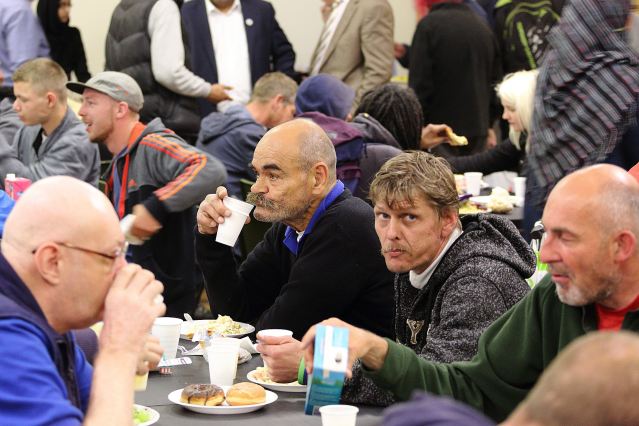 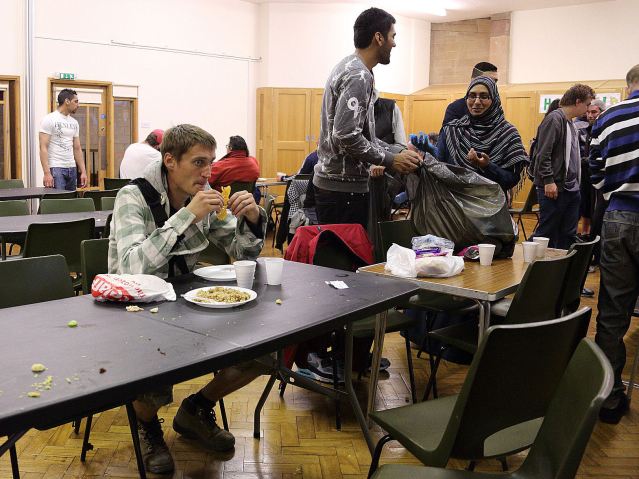 I was staggered by the number of young people who were at the meal. But the aspect which I continually find disturbing is how many people clearly have some form of mental health issue. They have no meaningful prospect of getting back into the “system” – their future seems very bleak.

This meal, along with daily initiatives by Project Touchdown and the other groups in Derby is a vital lifeline for these “forgotten” people.

The event for Project Touchdown was a total success – all of their customers left with full stomachs and bags of food for the following day, clothes and, as importantly, a fillip to their well-being. For the Council ( who claim to be “on-target” and “green” on homelessness) and many agencies who are set up to support the homeless and rough sleepers, a harsh reminder that they are not succeeding.

Zishan and most of the volunteers that night, together with many of the supporters and donors will have been fasting during the Muslim Holy Month of Ramadan. Apart from the faith-based connotations of that period it helps to remind each of them what it is like to be without food and drink for long periods. A reminder that I felt that they didn’t personally need, but their dedication to “getting on with it”, “doing the right thing” and not being put off by “procedures” is a strong message to those who are paid handsome salaries to look after the most vulnerable; they need to take a long hard look at themselves.

Zishan and his many Muslim friends and volunteers are not doing this to make a point – they are doing it because the teachings of their Islamic faith make them consider the needs of others and to encourage them to act. Another transparent message to all those who are forever stereotyping large sections of our community.