“They broke into her house, set the house on fire, took her away in a jeep, she was then beaten, and made to watch other people being beaten. She was then forced to torture and kill someone else – something she has never got over. I had to look up the names of the implements of torture as I had not heard of them – but she is a very sensitive and sweet person – but war brings horrors”

Just one of the many stories that the people who visit the Derby Refugee Advice Centre (DRAC) have endured which has caused them to flee their home country and to seek asylum in the UK. Each one of the 50+ people per day, that visit DRAC looking for guidance, support, clothes, food, and local human warmth has their own harrowing history which most of us in the UK, thankfully, could never contemplate. Sadly with that complacency comes cynicism, and Asylum Seekers have gained a negative notoriety in the media borne out by ignorance and bigotry. This narrow-mindedness implies that they are simply seeking an easy life, with the intention of extorting money out of this country through an illegal border crossing, and questionable activities. That is one, ill-informed viewpoint. The other perspective is simply humanitarian, and that the focus should be on the fact that an individual human being finds themselves in Derby needing help.

I spoke with Hannah Stirland, as a member of the DRAC team, to understand more about how she has approached dealing with the asylum seekers who visit as their clients.

“You see conflict on the news and you see these terrible war zones, and you see people treating each other so badly, then you see people come here, and you feel connected, you feel that there is a thread linking you, and you have that social responsibility to help someone. It’s not about nationality, gender, or anything it’s just about one human being helping another human being when they are in distress and making them feel better and offering them sanctuary”

But for Hannah, there is more to discharging that “social responsibility” than simply giving advice.

When Asylum seekers come to this country they are entered into a Home Office process which, at some stage involves a hearing and review of their case. This may result in them being allowed to remain, and so becoming refugees, or their case could be rejected and they remain in limbo, or have to return back to their home country. Whilst they are waiting for their hearing, they are placed in basic housing within the city, managed through G4S, provided with £37 per week cash ( single adult), and they are not allowed to work. For many, who are educated, professional people they are faced with the prospect of isolation, and chronic boredom. They may not be able to speak the language, well, if at all, have limited access to language education, and restricted options for socialising.

It is this plight that drove Hannah to think, broadly, as to how she could help from within DRAC;

“If you don’t speak the language it is very hard, and if you only feel safe with people who are like you from Syria, or Zimbabwe, for example,…then at some point, someone from the local community has to reach out and say “You’re one of us, you live here, you are part of our community, you’re part of the family of Derby”

One of the early workshops that she launched was creative writing, and the initial intention was to get them to write fictional tales, however the clients were drawn more to telling their own stories. In many cases the language was basic, but it gave them the opportunity to share something important and deeply personal, in a safe place, with people who were non-judgemental. For some this was the first time that they had really opened-up to anyone:

“.. they wanted to write about their own stories, and to write about torture – and we had lots of tears in the workshop – it was a catharsis. I remember the tears that came when people read and then there was laughter straight after, and smiles – it was like a release. We were all moved by it”.

Hannah is also keen to encourage people into volunteering elsewhere in the City, to promote connectedness, their understanding of English, their own self-worth and improve their general mental state. This is not always possible because of language constraints so Hannah will think of other possibilities, for example, inviting them to work in the DRAC kitchen making tea, and helping out with general duties. She will spend extra time with them so they can pick up elements of English and so, gradually, become more comfortable in their surroundings.

During the summer a group of clients from DRAC went to Wirksworth to help with the community gardening. It was a great way for them to really become involved in something tangible that could help local people and re-gain a sense of worth and self-esteem. It was a two-way activity on many levels, as Hannah recounted:

Developing this theme further, she put another workshop on for “Flower arranging”. This might not have seemed to have been suitable for all, but in fact both men and women enjoyed the opportunity to be creative. There were 21 clients taking part, from countries including Syria, Kuwait, Zimbabwe, Sudan, Pakistan, Eritrea, Iran and South Africa. The 2 tutors donated their time free of charge, and also brought the flowers as well. Hannah managed to find some other materials including glitter to give some extra sparkle to the creations. Her idea then went one stage further, and she arranged to donate the bouquets to 3 dementia care homes, one for young people with mental health issues, and the Padley homeless hostel. It highlighted to the clients that there were people existing within the Derby community who were also vulnerable for different reasons.

“ When we took them to the Padley Centre, there was a young homeless man, and he came up, and said “what’s this?”, and I said, “It’s a bouquet – we’ve bought it for you”…and he said “That’s banging, that is!” 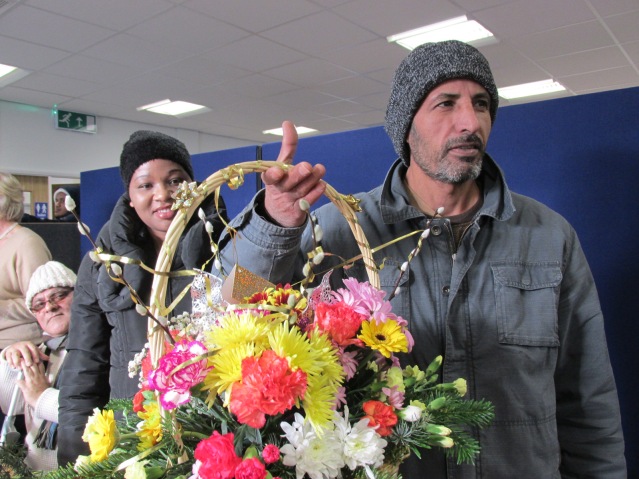 But perhaps the most challenging of workshops for many clients coming from countries with stricter religious codes was the presentation by Jayne Wasdale, a transgender woman. She came along with her wife, and daughter. The room was full of clients, mainly from African countries, few , if any, would have had the chance to meet someone like Jayne, and a few clearly struggled with the situation. As a result of the talk, and the obvious love and respect between Jayne, and her wife, the barriers were broken, and the clients warmed to the 2 women presenting their story. Hannah’s view was that it was important for people who were going to live here to understand and accept the tolerance and understanding that is prevalent within our society, especially in this particularly delicate area.

Hannah is always thinking of ways in which she can make some difference to the people who find themselves in this strange and, at times, impersonal environment. A future workshop will be on calligraphy – another inspired idea. Some people can approach it as simply an art class, or it can be a way of learning the alphabet and the language, or, for some, a way of turning their simple prose into a treasured document, in a way that they would never have imagined. It can bring people together from all backgrounds and abilities, to commune without any need for embarrassment, to provide help to others, and just to feel connected with other human beings.

In the last year, there have been a multitude of other courses which have helped broaden the experience and knowledge of the clients at DRAC:
– Cancer Awareness
– Well For Life’ health checks (HIV testing, blood pressure, diabetes, weight check)
– ‘Emotional Eating’ by First Steps – most well-attended workshop with 32 clients (discussing anorexia, bulimia and how stress affects diet choices.)
– Careers Workshop,
– Motivation & Inspiration,
– Derbyshire Wildlife,
– Presentation Skills,
– Health & Safety,

I was interested to know what was behind Hannah’s motivation and enthusiasm for making such a difference to a stranger’s life. She is not particularly inspired by any great religious zeal, or complex academic theory – it is much simpler, and more fundamental:

“It’s a heart… and a love for humankind, and I believe that everyone has that within them”

But she does have an underlying philosophy in basic morality and “ the idea of redemption and what it is to be human, and how we adapt and relate to people” and one that is centred in a feeling of real and committed social responsibility.

Her work at DRAC, in conjunction with the daily practical advice also given by her colleagues, provides a real sense of hope, grounded in opportunity, warmth, and inspiration for those whose lives are in turmoil, and instability. Capitalising on every person’s innate creative spirit and basic desire to be good as a means of realising personal achievement and propagating togetherness is impressive, but in her own words:

“I love literature, and I love the arts, and I see that as something that can heal . I think you stretch yourself if your imagination can become anarchic and run riot – then it makes you more enterprising and more capable of doing great things – it can empower you. There is this idea within me of wanting to make people aware that they are capable of great things, and nobler acts of human kindness. I just think that people like being nice people”