Thankfully, for most of us, the inner workings of our body are a long-distant biology lesson at school. We probably have some idea of which tubes go to which organs, and what happens to us if we eat badly cooked food or drink too much, but there is a routineness about our ignorance of our own body – until something goes seriously wrong, and then we become experts.

Afzal Moghal is an expert on his kidney function, or more accurately, kidney malfunction. In the early 1990’s he found out that his kidney’s were only working at 15% of their capability. After going on dialysis for a few years, he finally got a transplant on 5 December 1993. This kidney worked well for 16 years then, in 2009, it failed. He was back on dialysis. He started back on peritoneal dialysis, and then from 2012 he reverted to hemodialysis.

Hemodialysis is a process whereby the body’s blood is circulated through a machine containing an artificial kidney which removes the toxins. In many ways this is a very routine process. Afzal elected to be a self-care patient which means that he sets the machine up, and himself, throughout the whole of his stay in hospital. There are medical staff available should he need them, but he is now very experienced in many of its complications.

I had the opportunity to be with Afzal as he went through the whole process at the Royal Derby Hospital. The set-up takes about 30 mins and is a meticulous sequence of events as he tubes up the machine, and installs the “kidney”, and then prepares and connects himself. The most difficult part of the procedure to watch, and most painful for Afzal ,is the removing of the scabs from his arm at the location points of the needles. Every few days these wounds are opened up, and only allowed to partially heal. He has a small pointed, plastic tool which he uses to dig away at his arm, and create an opening. The grimace, and anguish is clear from his expression. The second most painful part is the insertion of the needles into his arm.

When the needles are secured, and the pump is working properly, he can then sit back and relax…for 4 hours, as his blood is pumped from his body and cleansed. After this time, he has to reverse the process – a lot of which he has to do one-handed, as his left arm is still connected. He uses a sprung-loaded contraption which helps as a “finger” to keep pressure on the wound as the needles are removed. This helps with its sealing. He then has to de-tube the machine, remove anything else that has been in contact with his blood, disinfect it, and make it ready for the next patient. 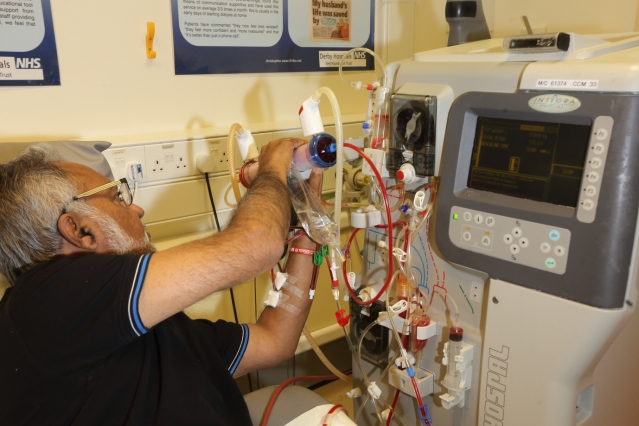 This all happens 3 times a week. On Monday and Wednesday he’s in hospital by 6.30am, and on Friday he goes after prayers, at 2.00pm. On the night before the early-shift days he has disturbed sleep – more to do with general anxiety about over-sleeping than the treatment itself, but it means that by the time he gets home he is very tired. More often than not – he goes straight to bed.

The family’s life is not normal. It has to revolve around Afzal going to dialysis and constant consideration of his health and needs. Going away is a major logistical operation as the dialysis cannot stop. It is possible to go away with a lot of pre-planning, and discussion with the hospital local to the destination. Trips abroad are even more more complicated, but invariably this tends not to be a holiday in the normal sense of the word.

The dialysis is not the complete solution. Afzal has to be very careful about what he eats as some elements of food can be a problem to him. Also he is limited to 500ml of liquid a day . Without a functioning kidney his body has no means of dealing with the excess fluid other than by storing it; this leads to other complications. With no kidneys, and no normal liquid extraction, he doesn’t pass water anymore. The consequence on a normal lifestyle of manually managing water intake is profound.

Afzal is waiting for a kidney transplant and he knows that the best opportunity for a match is from within his own South Asian community. Although there are a high proportion of Asian people on the waiting list, they are significantly under-represented on the organ donation register. This is a major problem, and he is active in promoting the idea of Organ Donation within the Black, Asian, and Minority Ethnic groups within Derby. 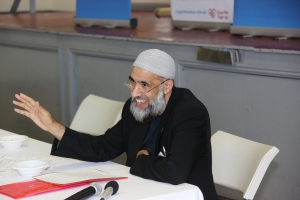 Afzal is part of the Muslim faith and there are differing opinions, and great uncertainty as to whether giving organs is allowed under Islam. A conference was held on 30th September 2014 in the Pakistani Community Centre specifically addressing this issue. Talks were given by a scholarly representative, a local Imam, and Dr Shafi Shujra from the Muslim Council of Britain. In summary, they fully supported the idea of Organ Donation as being within the tenets of Islam.

Dr Adnan Sharif a Consultant Nephrologist from Birmingham suggested that religion and faith was largely used as an excuse for general laziness and he could not see any reason why any faith or religion would be opposed to donation.

Afzal’s daily routine continues unabated, whilst he campaigns with his Derby colleagues for greater participation in all forms of donation hoping that one day, he’ll get the call!

POSTSCRIPT:
Just as the conference was breaking for lunch, I heard Afzal talking to his wife about leaving early. This struck me as strange as both of them are key players in the Derby Organ Donation Project. He went to the front, picked up the microphone and said  “ I’m sorry I have to leave the conference, but I’ve just had a call from Nottingham and they’ve told me that they have a kidney for me – so I must go now”. This was met with a big round of applause, and I’m sure many “lumps in throats”, and tears in eyes – I know I had!

Sadly, it transpired that the transplant could not proceed. The disappointment and routine disablement continues unabated…