For anyone who is familiar with the plight of the Roma people, would be surprised to find the words ‘Roma’, ‘community’ and ‘care’ in the same sentence let alone in the title of an organization based in Derby.

Roma Community Care (RCC) was born 2 years ago under the auspice of the Multi-Faith Centre (MFC) with the basic objective of being a local advocacy group for the growing Roma population. Uniquely, RCC was formed with the clear view that it would be run by Roma for Roma with the MFC working as experienced partners, and mentors. RCC is leading the way, in the UK, with this model of organization.

Michael Daduc, is the lead advocate for RCC, who works closely with Phil Henry/Simon Williams from the MFC. In early 2013, a number of organisations in Normanton/Arboretum were concerned about the lack of facilities for young people in the area. This was in the context of a general disquiet about the youth congregating in the streets causing upset to some residents . MFC in conjunction with Reverend Elizabeth Pinder-Ashenden of the Pear Tree Baptist Church decided to form a “Youth Café” in the church buildings. Whilst this is open to all of the youth in the area it is predominantly attended by Roma. They have about 500 names registered to the club with a regular attendance of around 70.

This has evolved since those early days and now there are a number of different clubs during the week for different age ranges meeting at the church, and St James Centre. They cater for anyone from age 7 through to 18.

The clubs are not just an opportunity to socialize, they support educational activities as well as arts, and sports. Regular visits from other institutions like the Police help with improving awareness and engagement with other external organisations that will have been points of friction in their home countries.

RCC is not just about the Youth. Three times a week the team hold drop-in sessions ( at Mandela Centre, soon to be at Pear Tree School) which helps the adult population navigate through the difficulties of resolving issues with the Council, Job Centre, Department of Work and Pensions, Landlords and the Tax authorities. After dealing with so many cases the small Roma team at RCC have a lot of experience of settling a wide variety of problems. This not only helps the individuals concerned but assists the government institutions who may not always be familiar with Roma specific issues. 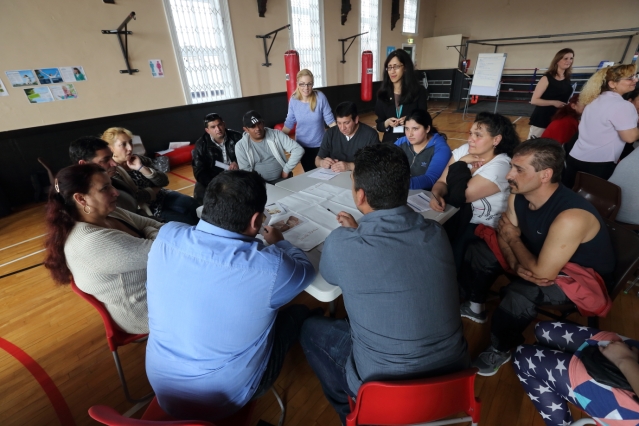 The Roma Community have many health problems. These can be due to either legacy complaints from their deprived conditions in their home country or because of poor diet, smoking and drinking. Derby City Council Health department have teamed up with RCC on a project to spread key health awareness messages into the community. A number of Roma people have volunteered to be Health Champions within RCC to support this programme.

On 1st October RCC will move their office to the Pear Tree School. In addition to being more visible, and more accessible, one key objective is to encourage Roma parents to become more directly engaged with their children’s education. This can only help to provide a long term improvement in the development of the young people, and be an integral part of the cohesion process.

Many Roma find themselves struggling to get work. Although they can be found throughout the region in factories doing very low paid, difficult, work there is still not enough opportunity for them. In many cases they need help with job seeking skills. This can range from writing CV’s, making applications, arranging interviews etc, through to the more softer sides of personal presentation and understanding British cultural norms.

This latter point is very important in everyday life. Immigration is a sensitive issue, and the normal behaviours of the new arrivals whilst accepted in their own country can be seen to be alien, unusual, and in some cases rude and objectionable in the UK. This also applies to British people living in other countries. As the RCC team have lived in Derby for many years, and have worked with many British people they know where the norms of Roma/East European culture can be misunderstood and help in highlighting where changes can help. This is a very imprecise science, but simple, small adaptations around politeness, civility and manners can be powerful in better relationships.

Michael’s team has grown over time and now includes Margita Cechova, Petra Budiova, and Tomas Cibrik who are the key members of the group. They are supported by 20 volunteers who are also critical in expanding RCC’s range of services and the spread of the advocacy message.

RCC is also part of the Derby based Roma Leadership Group which consists of senior members of the Roma church, ; it also has connections with Europe Roma Network. Whilst RCC’s primary aims are local, it has a responsibility for promoting Roma rights nationally and internationally, in addition to an awareness of their tragic history especially the little-remembered Genocide during the Second World War by the Nazis.

Although Derby is a very multi-cultural City, the demographics have shifted quickly in the last 10 years in favour of people from East Europe. Coupled with a populist view that most immigrants are in the UK to “exploit the benefits system” means that for Roma, in particular, there is the danger of becoming an unwitting political scape-goat; something that is far too familiar to them.

Fortunately, Derby is served by many committed, experienced and influential people throughout society who have a focussed humanitarian perspective on how to deal with multi-culturalism. They are also very aware of the challenges and responsibilities that a large Roma population brings. I am sure that without RCC the City would make progress but – How quick would it be and at what cost? With RCC, increasingly, being an integral part of the city-wide support network, and being central to leading and facilitating change, then I am sure that Derby will become known as one of the first cities in the UK that is seen to Care about its Roma Community.

POSTSCRIPT: In 2014 Roma Community Care was nominated in the Short List of the National Diversity Awards (Community Organisation Award for Race, Religion & Faith)

Sign created by Roma Youth for their Nation Day event