Early in 2020, with the Assembly Rooms refurbishment plan in tatters, St James Securities (SJS)- the developer of  Becketwell, presented the Council with an offer it couldn’t refuse; to build a modern, 3500 seater, performance venue , for £45.8m, at no-risk to the Council.

In July 2020, with no details of what the venue would offer, and no business case – the Tory Cabinet agreed to proceed and delegate the delivery of the entire project to Officers of the Council with no further opportunity for formal, meaningful,  scrutiny by elected Councillors. 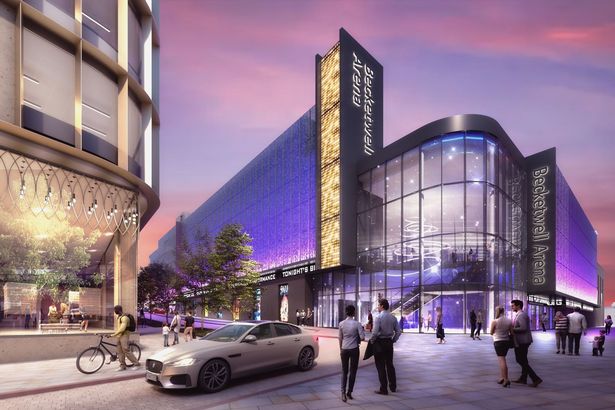 In March 2021, the public still has no detailed specification of  the Venue, nor sight of the business case.

What is the Business Case?

Cllr Poulter, the Leader of the Council, continues to be evasive about the Business case.  He repeatedly states that SJS are still developing it, however he is missing the point.  SJS can’t prepare the business case from a Derby City Council perspective – that is the only one that matters for the people of Derby. Without this, how can he, or his Cabinet colleagues, know  whether this project represents a significant drain on the Council’s finances.

One might wonder why neither Poulter, Rachel North (Strategic Director – Communities and Place) , nor Simon Riley ( Chief Finance Officer) can present the business case in one single coherent statement given that the individual figures have been published in Cabinet papers.

Cost of the Venue – £45.8m – this will, initially, be paid by SJS who will absorb all cost risk. When the building is handed over, Derby City Council will pay this full amount; the venue will be leased to an operator.

Rachel North stated that the Venue will be like the Hull Bonus Arena which cost just £36m in 2018.  IPW… led that project, and will do the same in Derby.  The question is, why is Derby paying a premium of £10m – is this to cover the risk? What risks would there be with a relatively standard arena model?

[IPW… has been providing DCC with venue consultancy support since at least 2016, including on the ill-fated Assembly Rooms refurbishment scheme.]

Project Management costs – £0.8m – these have increased from £0.6m since July 2020. The Chief Finance Officer tried to suggest in the Cabinet meeting that this was planned and was detailed in July 2020, This is not factually correct. It is an unplanned overspend.

Cost of re-locating Padley Centre from Becket Street – £TBA – this is an unknown cost.

Loss of Derby Arena (Velodrome) profit – estimated £0.1m pa – part of the deal is that the Council owned, and run, Arena will not be able to stage the lucrative annual Christmas Panto or other competing events. There will be a loss of some of the £0.3m pa profit.

Loss of car parking fees – £0.45m ( minimum) – The Assembly Rooms car park will be demolished, and will be replaced by one at SJS’s Becketwell site – not Council run. The revenue from a new, modern car park, was expected ( in the previous Performance Venue business case) to be £0.8m. This is lost opportunity for the Council.

In total, the annual outgoing costs ( lost opportunities) from the Council’s finances will be £2m ( minimum).

The only income will be from the lease rental, and a share of ticket receipts. Rachel North, in the Executive Scrutiny meeting advised that this would be around £0.5m pa

The papers are silent on whether there will be incremental Business rates for the Venue.

There will be wider benefits to the City, however, how much of that will be attributable just to the Venue is a moot point; in any circumstance that would not be relevant to a Council specific business case.

It is clear that St James Securities and IPW… seized and exploited an opportunity.

They could see that the Council’s Assembly Rooms refurbishment plans were about to fail ( after all IPW… were “on the inside”) – probably well before the Tory administration were prepared to accept the inevitable. They would have known that the Council was desperate for a solution and the Tories have clearly been “seduced” by the “no-risk” cost option and are prepared to pay anything ( of the order of £10m)  in order to secure a Venue and “save political face”

The Cabinet agreed a cost of £45.8m “blind” – without any knowledge of what the City will get for that money, and without any understanding of the financial burden on the Council’s finances. That is reckless!

It is unlikely that borrowing costs will reduce dramatically and, unless the income significantly exceeds expectations the business case shows a drain on the Council’s revenue budget of ~£1.5m pa – this equates to a 1.5% increase in the Council Tax.

I don’t doubt that when challenged Simon Riley, the Chief Finance Officer will provide opaque and convoluted answers in an attempt to frustrate any form of scrutiny.

Cllr Poulter gave a clear commitment in July 2020 to publish the business case, and open it up for scrutiny.  This was not presented on 10 March 2021 – he stated that it is “just a few weeks away”, conveniently pushing it to a point just after the elections.

One has to ask why the Leader of the Council, and Senior Officers spend so much effort equivocating rather than just giving simple and clear answers to straightforward questions. Their body language, and verbal obfuscations, exhibit their great discomfort with this subject.

Unpalatable answers? A massive hole in the business case?