The Council Cabinet sounds like an auspicious public body where brave, controversial decisions are made with open, independent and vibrant debate. Where the elected representatives stand their ground, speak on behalf of the residents of Derby, and challenge the Council Officers. Sadly it couldn’t be further from the truth. It is a truly depressing, and disturbing occasion. 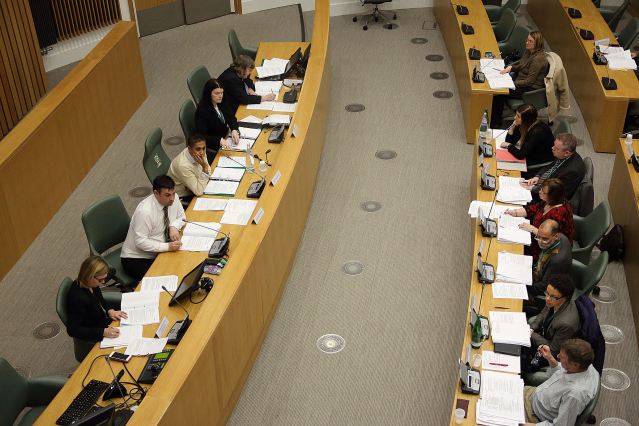 Cabinet Councillors with Officers, and their scripts

Sitting next to each Cabinet Councillor is an Officer from the Council – keeping them on track, making sure they say the right things, “pulling the strings”, helping them out with any difficult questions….except of course there is no controversy. Most of them spoke as though they were reading from a script….with the acting skills of a wooden, soap actor.  In fact at one point, Cllr Rawson could be seen running his finger across the page just to make sure that he was 100% on script.

With the exception of a muted presence from the 3 Leaders of the Opposition parties who had practically no right, or opportunity to speak, the leader was presiding over a totally compliant forum. The mood was intensely uninspiring, the agenda was catalogue of “done-deals”, with a sequence of pointless “rubber stamping” votes.

I felt very sorry for the representation from the Citizen’s Advice Bureau and the “Save the Moorways” campaign who joined the public gallery with some semblance of an expectation they they’d witness democracy in action. What they were met with was an insipid, bland, characterless, lethargic pantomime. It was clear that the Labour Party HQ had instructed them all to mention, at least once, the tired cliche about Tory Government cuts – it was mentioned on at least a dozen occasions in the space of one hour.

Cllr Repton must take the award for the most disingenuous minor discharge of manufactured emotion in his failed attempt to justify the reckless decision to cut the Voluntary Sector Grants.

“I’m both very saddened and angry to have been forced by the Government cuts to bring these recommendations to the Council. I’d never have thought I’d see the day where a Central Government would force these draconian cuts on us, and sub-contract the responsibility for enacting them.” He proceeded to explain the cuts to the Adult Social Care budget which he maintained had forced him to cut non-statutory services “I’m certainly not happy about that, and I know the local organisations aren’t – over many months we have been involved in discussions, and been invited to meetings, and we understand the position we’re in…..they’re not happy, and we’re not happy either, but there is absolutely nowhere else for us to go at all.  Anything else that we could have done to prevent these, I want to make it absolutely clear that we would have done that. This is a last resort for us…and so it is with a very “heavy heart” that I’m here today recommending this because of these Government cuts that we face”

Cllr Jones (Lib Dem) asked whether there was any way that the Council could support the organisations during the period in which the cuts would take effect, and bridge the funding gap whilst alternative sources were being secured ( assuming alternatives did exist).  Cllr Repton confirmed that they would discuss this position with “each and every one of those groups” – he then took the opportunity to repeat ” the one thing we haven’t got is money”.  Cllr Banwait helpfully outlined the option for Voluntary sector organisations to be contractors for Council statutory services. Intriguing idea but:

This was very far from “democracy in action”. The elected representatives are fed sufficient information by the Council Officers to make them feel as though they are “in control”. The reality is that the Councillors don’t know the detail, have no capacity to challenge what they’re being “advised”, and vote in line with how they’ve been instructed. It was a “puppet show” – pure and simple. Who’s actually “pulling the strings”?