Women’s Rights should concern us all – including Men! 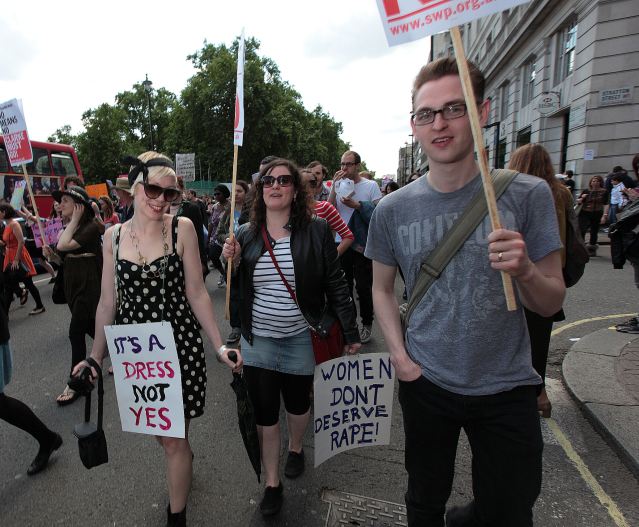 Although in the UK we might consider that we have come a long way in the last 100 years on women’s rights, in reality, many of the underlying perceptions, behaviours and core beliefs have barely shifted. Reflecting back on a country where women didn’t have the right to vote, makes us view those times with great disdain, and disbelief. I’m sure at the time, there were many who felt that men-only voting was perfectly reasonable. The great act of leadership at the time was among those women, and men, who could remove themselves, intellectually, from the mainstream and view the situation from a much clearer and perceptive angle. They could see how ridiculous it was and that change was necessary. In 2015, complacency and indifference, leads most of us to believe that we have solved the “women’s rights” issues, and it is all very passé. This is why those who try and bring to the fore, real on-going inequities, are considered to be on the fringes, and are often frowned upon – like the Suffragettes?

The issues today in the UK are, in many ways, much more subtle and not solved by further legislation. Domestic abuse seems ever present, and the spectrum of sexual harassment throughout society still, disturbingly, accepted, relying on the slow change of societal norms to condone it. In other ways we have been presented with new cultural problems affecting women that wouldn’t even have featured before e.g. Forced marriages, and Female Genital Mutilation. So, addressing issues which affect women in the UK, directly, has become more varied, and culturally specific and needs constant attention.

The conundrum in 2015 is that those who are most vocal in promoting women’s rights, and inequalities, are predominantly women. This has the danger of resonating with the media biased view that the feminist movement is overly-politicised, too exclusive, and even anti-men when in fact this misrepresents the position of most women. In the same way that non-black people can be vociferous against racism, or heterosexuals can support Gay rights then men can be actively supportive of women’s rights. It should be inclusive. What is required is social change, and 50% of the population are men, and a diverse advocacy is the only way that we can all move forwards.

We should all be striving for a world that feels comfortable with celebrating, and enjoying, the positive aspects of our gender differences but is intolerant to any exploitative imbalance which affects anyone’s freedom of choice, human rights or dignity.

International Women’s Day in Derby (March 7th 2015) is one occasion where the community can start to appreciate the contribution of women and understand new issues in ways which they may not have previously considered. I will be supporting the event, with a view to promoting the idea that men have an equal part to play, and that it is the responsibility of all of us… to care!