Vaisakhi : A Journey into Sikhism

Before Vaisakhi this year, if someone had asked me to quote 5 things I knew about Sikhs, and Sikhism, I would have struggled to have reached that number. 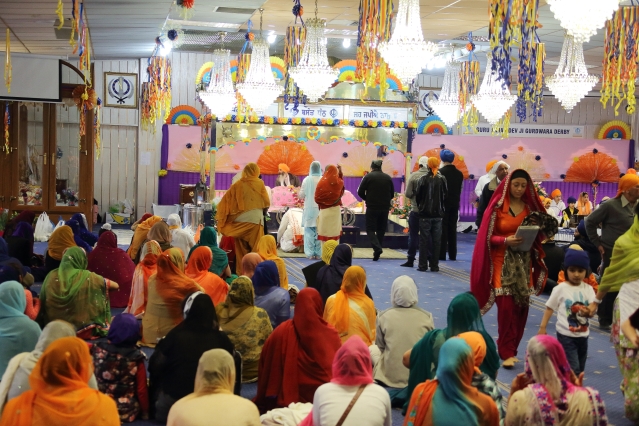 The Vaisakhi event started from the Guru Arjen Dev Gurdwara on Stanhope Street which is the largest of the 4 in the city ( with the 4th still being under construction). On entering the Gurdwara I expected there to be a requirement to cover my head – that much I knew. The spare cloth for visitors to create a bandana was certainly helpful, and with the assistance of someone who was available, I managed to achieve this cover with the minimum of style. I made the first mistake of entering the dining room with my shoes on but my minor misdemeanor was politely highlighted to me. 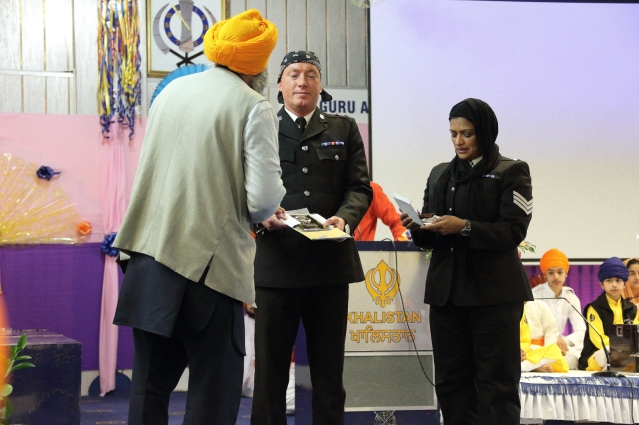 Inspector Richard Keene from Derby West Police made a speech in the main hall, together with his colleague, Detective Sergeant Kully Grewal-Pollard from Public Protection, based in Ripley. He expressed his commitment to support the Sikhs in the Normanton area and his continuing focus on being part of the communication process in this rich multicultural district of Derby. The leaders of the Gurdwara recognized the importance of Inspector Keene’s personal engagement with Vaisakhi over the years, and his approach to cohesion in the area, as well as the important role played by DS Grewal-Pollard,  and they marked this by awarding both Police officers with a gift of appreciation.

Outside of the Gurdwara I met with Jas [apologies for spelling] who was with the Guru Nanak Mission. This is a Sikh based organization who provide free, cooked food, toiletries and clothes to the homeless at the Assembly Rooms on Saturday and Sunday evening ( see separate article – including how you can help) 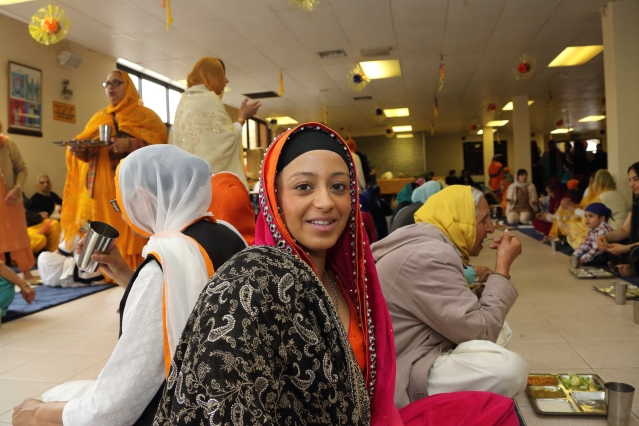 She explained very thoroughly the underpinning principles of Sikhism, and what it means to be a Sikh. There are plenty of resources which will give the reader a detailed examination of the subject. The points which impressed me most were ( with apologies if I have used the incorrect terminology)

– Men and women are considered equal. If anything, women are given a slightly higher status as child-bearers.
– The free food provision for anyone who entered the Langar ( Punjabi for kitchen).
– Everyone, apart from the infirm, sat on the floor to eat as a sign of equality
– The teachings of the Gurus told people to be charitable, and to give to the needy
– For those baptized, to avoid changes to their body form whether through cutting hair, body piercings, tattoos etc. The inner spirit was the most important part – the body would be ashes eventually.
– The “Book” whilst physically pages, and binding, was seen as a real representation of the spirit/God/person, and should be treated as such with respect and dignity. One should not turn one’s back on it – especially in the Main Hall.
– All Sikhs wear a bracelet as a reminder to avoid stealing but also a symbol of connection with faith.
– The turban is a man’s crown – as a Singh, he is King. In some cases women also wear turbans.
– “Recognise the whole human race as one” – taken from the Guru’s teachings.

Everyone I spoke to reinforced these messages without any form of prompt, such is the depth of the belief and teaching. 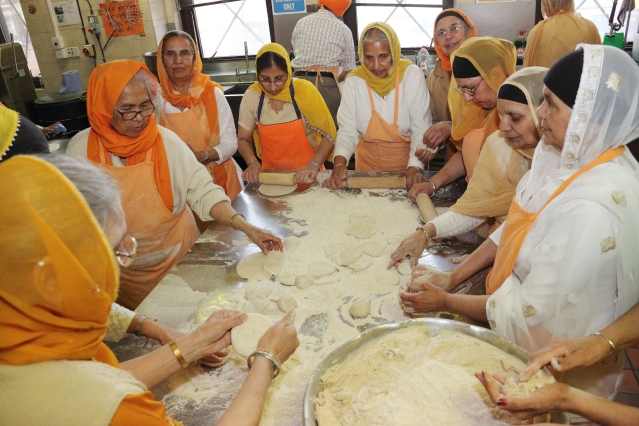 Jas took me into the kitchens of the Langar. The activity was impressive as they were feeding several thousand people. All of the food is provided by donations from within the Sikh community and anyone is welcomed to join them to eat. 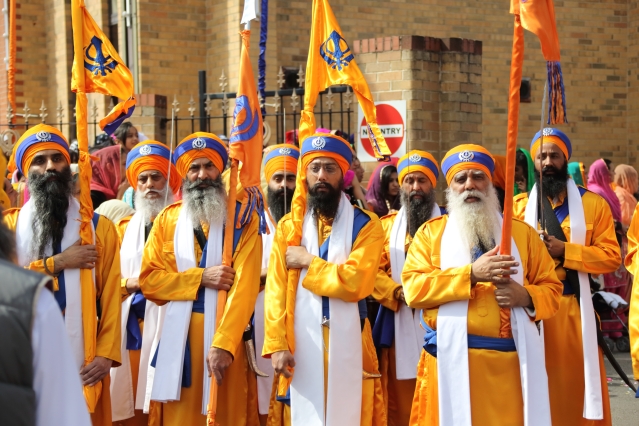 During the procession through Normanton and past the other Gurdwaras I was approached by a man called “Charlie”. He seemed to know most people along the route, and had an eye for where the potential trouble makers were – although, none really made their presence known. He gave me a valuable insight into the way that the Sikhs are being treated in India, and some of the historical atrocities. The Indian Government don’t recognize Sikhs as a separate religion, and the level of oppression, at face value, towards the Sikhs, seems to be very disturbing. As a group, they see themselves as a nation and have nationalistic aspirations towards a place in Punjab called Khalistan. Charlie had a lot he wanted to tell me, and I felt slightly ashamed that there was so much which was new to me – like many of the groups within Derby there is a complex and deep background to why they find themselves in this City. 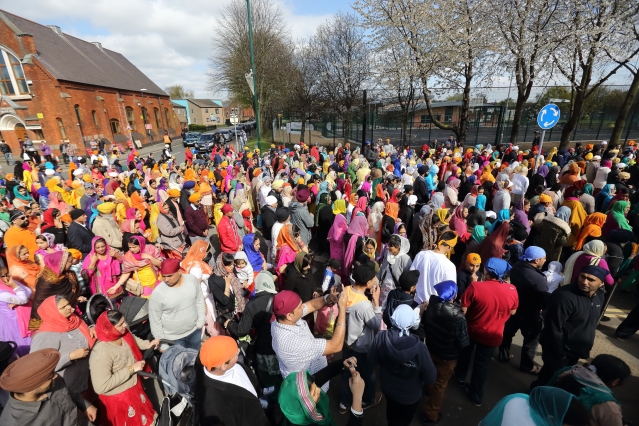 The parade through the streets of Normanton took just over 2 hours. Although it was attended by many thousands of Sikhs, there were very few people from other local communities who came to enjoy the day other than those who happened to live in the streets en route. That was something of a surprise to me. Those who were present, respected the dignity of the occasion and stopped smoking and drinking as the parade passed by.

When we finally arrived back at the Gurdwara, there was food and drink being distributed to everyone. Perhaps my upbringing and innate politeness, as well as being an observer, dissuaded me from being part of it. Several hours in the sun, and carrying heavy camera equipment must have been showing – a young Sikh boy came up to me and said “ Do you want some water?”. I smiled – such a good Sikh! 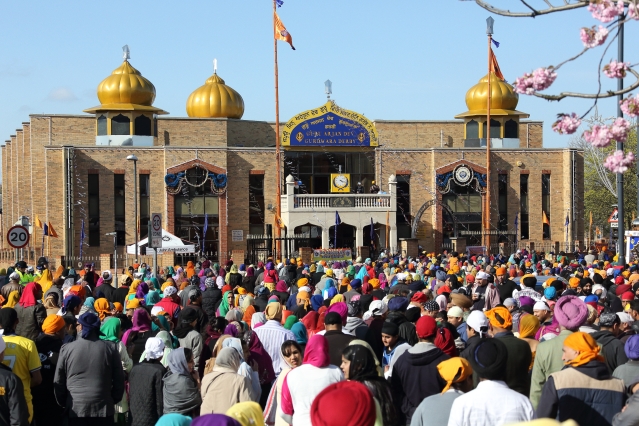 Vaisakhi was an interesting journey for me, and I feel, now, that I understand Sikhs, and Sikhism a little better than when I started. The sense of equality, inclusion, and giving, will be my lasting memory and having a high number of Sikhs in Derby, and, particularly, in the Normanton/ Pear Tree/Arboretum area, can only be a positive influence on the wider community.